After Night Falls Slot Review – Casino gaming companies are always looking to design profound and memorable games. One of those companies is Betsoft. Their game, After Night Falls, is a 5 reel, 30 payline 3D slots game. That comes with a scatter symbol, a free spin, a wild symbol. Moreover, it has a maximum jackpot win of $625. Casino players looking for an engaging and exciting game will find that this particular slot game is very intriguing.

In the slots game, Detective Rousseau is one the hunt for a thief is who clumsy and the casino player must assist the detective in locating the thief while also gaining some potentially massive cash rewards in the process. The After Night Falls slots game is set in a town which is being terrorized by a criminal. The casino player will see the criminal from time to time on the left side of the slots screen. It is the job of the inspector to interact with the slots reels. During both the bonus feature and the regular play dynamic. Intrigued? Read our review for more on the slot bonuses and amazing features.

The criminal and the inspector both appear as animated characters in the After Night Falls slots game. Additional paraphernalia and tools also show up in this Betsoft slots game such as a car, a swag bag, a security camera, jewelry, TVs and more. The casino player should keep an eye out for symbols that show up as stacked because this causes the symbols to collapse into one symbol while more symbols fall from the top of the slots screen. The casino player will be instantly rewarded with triple the usual prizes for that particular symbol and gain the opportunity for extra prizes provided by the two symbols that fall.

The sound effects in the After Night Falls slots game can be somewhat annoying but that does not take away from the rewards that the game gives. The game has a double-up round that is available after any on-reel win that is given. Pressing the double up takes the casino player to a second screen. Where they must guess whether the coin flip will land on heads or tails. If the casino player guesses correctly, then that will trigger a win that will be doubled. 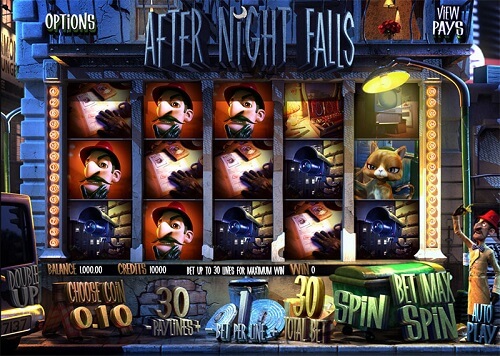 However, players could lose their winnings if the guess is incorrect. Every single symbol in the After Night Falls slots game has a sequence that is animated attached to it when a win is paid. However, the best ones are saved for the bonus feature. Three, four or five symbols of the desk in any position award the casino player with free spins. Which have a random multiplier of anywhere between 2 to 10 times attributed to them.

More free spins can be won by the casino player when the wild magnifying glass happens to appear on the screen. In particular, this symbol will move to a different position and respin the reels for free while it remains in place. These free spins continue until the glass reaches the left reel, where it spins one more time and then disappears. Three or more symbols of the thief put the casino player in the shoes of the criminal. Each subsequent heist will reward the casino player a cash prize that will be displayed. The After Night Falls slots game is one of a kind and stunning to play.