The Amazing Spiderman is a slot game from Cryptologic. A video slot, this is a progressive game that comes with 25 paylines, 5 reels, a multiplier, free spins feature, scatter, wild symbol and a maximum jackpot winning potential of $25,000. Cryptologic along with Marvel Comics brought the superhero to the online gaming arena. This is particularly significant given the popularity of Spiderman being extensive and far-reaching. This slots game then has and will continue to have a well-respected reputation. This version of Spiderman ignores the story of the film and focuses more on the comic book version. The graphics are fresh and modern and heavily illustrated with impressive styling.

Casino players of all types can play this particular slot game as betting begins at one penny. The top prize is worth $25,000 but the game also has a progressive jackpot as well that grows by the day. The casino player will be delighted with the game’s free spins feature, which speaks for itself and is quite a cool and remarkably interesting bonus feature. There is also a Venom feature in the game. During this feature, the casino player pursues Venom throughout the streets in an effort to save Mary Jane. The casino player along the way has many chances to win cash bonuses. 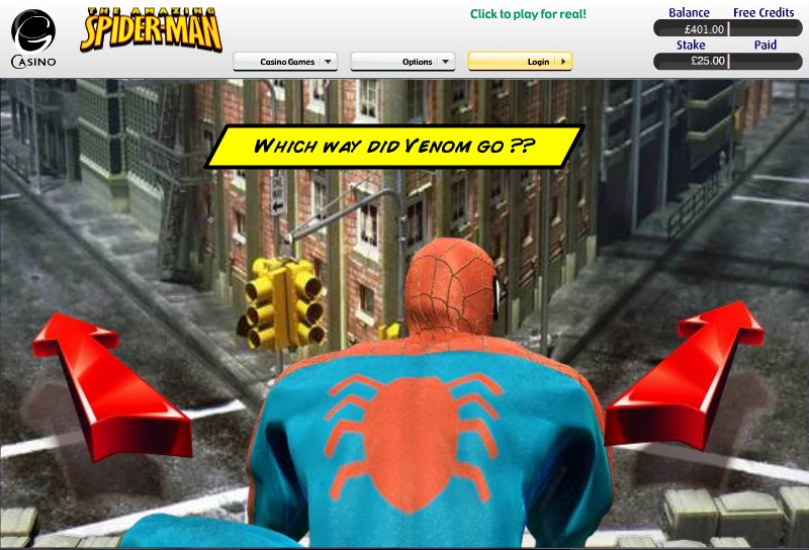 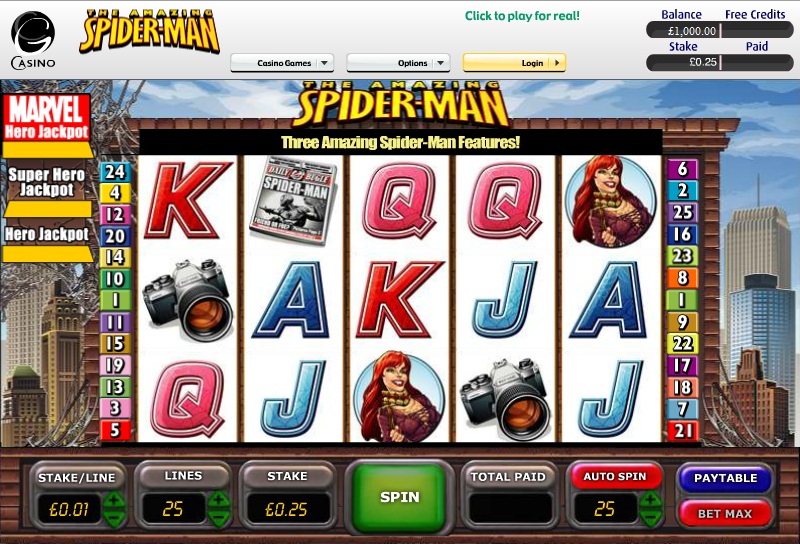 This slots game is a part of Cryptologic’s Marvel Superheroes series, which has a total of three progressive jackpots attached to it. This slots game works in conjunction with the other games in the series. The slots reels are depicted against skyscrapers in a big city with a helicopter that flies behind them. The symbols in the Spiderman slots game include a newspaper, what is referred to as the low-value symbol, a reporter, a camera and the Spiderman logo. The animation that Cryptologic applied is nicely done as is the sound effects and music.

The wild symbol in the Spiderman slots game is the Spiderman symbol that can substitute for other symbols in the game with the exception of the scatter. It can only appear on the 2nd and 4th slots reels, however. When it lands on both reels, this activates the game’s bonus feature. Each of the wins that the casino player has received is then calculated and Spiderman subsequently comes down onto the reels and turns all of the symbols on the 3rd reel into wilds. Each of the wins is then recalculated yielding an even larger jackpot for the casino player.

The Amazing Spiderman logo is the scatter in the slots game. The second and third bonus features of the game are triggered when three or more of these symbols show up on the reels. This particular symbol can show up on any of the reels and provide the casino player with a significant amount of winning possibilities. If casino players are looking for a dynamic, impressive and engaging slots game to play, then the Cryptologic Amazing Spiderman slots game will do the trick. This slots game is available at any online casino powered by Cryptologic.

Play the Amazing Spiderman at Top US Casino Sites