Avalon II – The Quest for the Grail is a non-progressive slots game that comes with a variety of distinctive features including a wild symbol, a scatter, a maximum jackpot-winning possibility and a free spin feature. A Microgaming creation centered on the time of Arthur and Merlin, it is the sequel to the original Avalon slots game that is well known to casino players and applauded by casino enthusiasts. The slots game has a total of five reels and 243 paylines for winning entertainment and excitement. There are many characters in the slots game including Arthur, Merline, the Black Knight, Morgan, Guinevere, and others, as well as the traditional poker symbols starting with the 10 and going up to the ace symbol. Microgaming included an interesting soundtrack that is based upon medieval sounds.

Avalon II – The Quest for the Grail slots game is a fantasy-themed video game that will undoubtedly remind casino players of the Hobbit or the Lord of the Rings with the way it is et up. Each element of the slots game has a quest to feel to it. Casino players of all types will find this video slots game quite fun. There is an autoplay mode as well, for those casino players that feel they are confident in using this particular mode. The features of the slots game are Merlin, who can appear at any time and turns the slots reels a dark colour. Essentially, Merlin operates as the game’s random multiplier symbol providing casino players with instant cash prizes. The Lady of the Lake symbol is the wild symbol and this particular symbol expands only on the third slots reel. The wild can substitute for other symbols in the game with the exception of the grail bonus.

The grail bonus is triggered when three or more symbols of the grail show up on the reels. These then set off many quests in the slots game – eight in total. The first is the Lake of Legend, where the casino player rolls the dice in an effort to collect pieces of the sword, Excalibur, which is legendary. Each respective piece unlocks a prize, with the largest starting if the casino player completely reforges the sword. The second feature is Misty Vale, where the casino player is asked to select an extra wild that is used in the free spins feature.

The casino player will receive fifteen free spins in total and any prize that uses the extra wild will be doubled also. Whispering Woods is the third quest, where the casino player must select a shield to reveal a prize. Casino players can accept or reject this particular shield up to a total of two times. The third choice will reward that prize. In this case, it could be larger or smaller than the original selection that was made.

Other quests include Hall of Shadows, where Arthur faces off against the Black Knight and each particular strike that is made rewards casino players with prizes; and Morgan’s Keep, where the casino player is given a total of twenty free spins and each spin includes what are known as rolling reels, where any winning symbol can disappear and be replaced by another symbol. This makes it very difficult to win, but impactful when it happens. Avalon II – The Quest of the Grail is very entertaining and is a slots game that should not be missed! 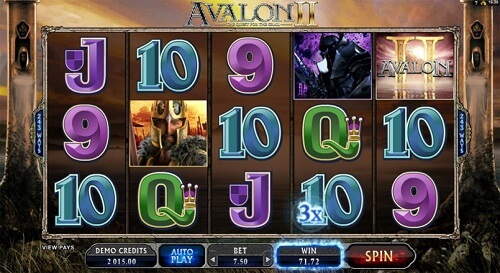