A Review of the Banana Monkey Slots Game From Playtech

The Banana Monkey slot game is a progressive slot from Playtech that comes with a wild symbol, a scatter symbol, a maximum jackpot possibility of $12,500, a free spin feature, and is full of animation and monkeys that swing from tree to tree. Some players will come to believe that the Banana Monkey game is one of the coolest slot games around full of cash rewards.

The slot game begins with a video that shows the banana monkey shaking a banana tree. This is not the only time the player will see the monkey as he routinely makes an appearance on the reels and during the bonus feature.

Once the reels load, the player can engage in the lively jungle background. The buttons in the slot game are covered by jungle plants and wood planks that entertain and engage as much as the symbols in the game.

The symbols in the Banana Monkey slot game include smiling monkeys, monkeys that swing, watermelons, coconuts, colorful designs for the nine, ten, Jack, Queen, King and Ace, giraffes and zebras. The game comes with jungle music and other sound effects that are entertaining and exciting. The Banana Monkey slot game comes with a variety of features and betting options.

Most of the Playtech slots do not include auto spins but this particular one does have this feature. Players can select any number of auto starts utilizing the menu on the left of the slot. During the actual gameplay, the button transforms into a stop button so the spins can be ceased at any time. Players can select to press the gamble button after any win. 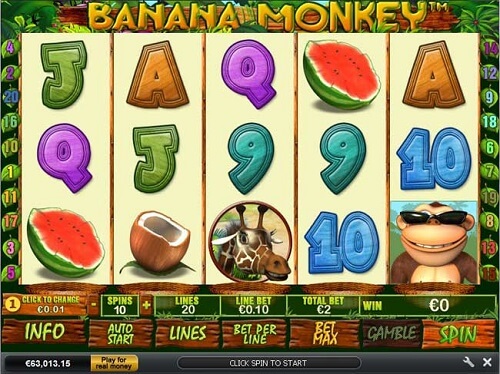 The wilds in the game are stacked, which means that they are powerful opportunities to win and win big. This wild will without a doubt make the player smile as it gives extra wins and substitutes for other symbols in the slot game. The Banana Monkey slot game also has wicker baskets that appear below the reels.

These are in the game in order to catch the bananas that fall when the monkey shakes the tree. Each time the symbol of the banana shows up, the monkey will cause it to fall into the wicker basket. When four have been collected into the basket, the player will be given a total of eight free games that come with a multiplier of 3X. This reveals the bonus feature of the banana. This feature takes the player into another area of the game that allows for more entertaining wins and ways to collect money.

The Banana Monkey slot game has been noted by casino enthusiasts as one of the most entertaining slots ever to emerge from Playtech. Players will definitely enjoy the theme and the many different and diverse ways to win from the stacked wilds, the wicker baskets that collect the bananas and award the bonus feature and the progressive aspect of the game.

There is no doubt that casino players will enjoy the Banana Monkey slots game from Playtech. The game can be found in any online casino powered by Playtech software.