From Microgaming, Big Break is a 15 payline, 5 reel non-progressive video slots game. It comes with a multiplier, a free spin feature, a scatter as well as a wild. Players can earn their big break with the maximum winning possible jackpot of $10,000. Microgaming has left no stone unturned with this interesting, entertaining and exciting slots game that is built on a relaxing theme.

Players can sit back and relax while playing this particular slot game. They can spin the wheel to obtain some tropical fruits, scape into relaxation with some surfing and listen to some summer music that plays in the background while racking in some impressive wins.

The Big Break slot game is one of a kind in the area of design and creativity. Microgaming is known for creating online slot games that are brightly colored and have dynamics that seem to blow other gaming manufacturers out of the water and players as well. The features of the Big Break slot game do just that.

There is a lucky break symbol in the slot game that is a feature specifically on the fifth slot reel and will make a winning combination for the player. It substitutes for all of the symbols in the game with the exception of the scatter, which in this case is the Big Break symbol and the Munky wax symbol.

When the lucky break symbol shows up, the payout that the player receives is doubled. The Big break symbol is the wild of the game and can also make winning combinations, however, this particular symbol sets off the bonus feature.

The Munky wax symbol triggers off a total of 15 free spins when 3,4, or 5 of them show up on the slot reels. An added bonus is that they can subsequently be retriggered in a round of free spins. In the free spins round, each of the monkeys, which are the slot games prominent figures act as scatters and pay the player from left to right. The only exception here is if the player gets the munky wax symbol, which pays anywhere it pleases on the slot reels.

The Big Break slot game also includes a bonus game known as Surf’s Up. The dudes and dudettes show up in a line and as they are scanned, the player must hit the stop button. Depending upon where they hit, the player has the chance to win 50 times the original bet. This feature is very rewarding to players. 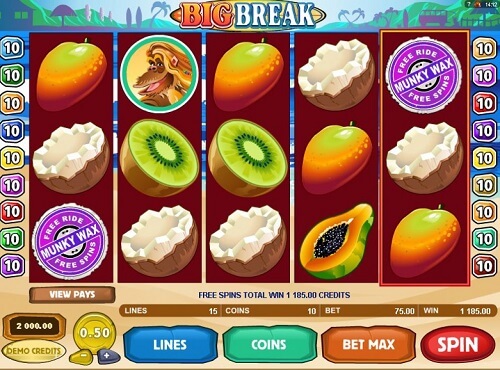 Players looking for a game that has surfing apes, a betting range that begins at one penny and goes up to $75, will find that Big Break is one of a kind in the area of winning and winning big. Not only that, but Microgaming created the slot game on the theme of relaxation with all of the sensational aspects that one would expect when they are relaxing. Players will undoubtedly return to this slots game, again and again, to play it because of the many features that are distinctive and the elaborate design it has.