Vampires have been a trend for a while, and it seems that it won’t die down anytime soon. BetSoft followed the trend by developing the Blood Eternal slot. As most of these vampire stories go, there is romantic underlining to it. BetSoft has designed the game to have 3D graphics with a gothic horror theme. What’s more, the game is also made to be accessible on mobile devices.

To find out what awaits you when you decide to play the Blood Eternal slot game, read our review below. You will find out about the bonus features, gameplay and where to play the game for real money online.

BetSoft has developed the Blood Eternal slot to have three rows, six reels, and 30 paylines. Winning combinations have counted both ways. Make winning combinations using the theme-related symbols on the reels. The symbols include a cross, gargoyles, holy water, vials, bats vampires and humans. There are also traditional card symbols J, K, Q, and K.

There are a number of bonus features on the Blood Eternal reels. The first one is the wild feature which is represented by the gold wild symbol. It will replace all the symbols on the reels except for the scatter symbol. They also substitute for Bats but as a single bat.

The second is the bat feature called Double Bats. You will see that there are two different Bat symbols on the reels. There is the single bat symbol and the x2 bat symbol. When you land these two symbols in a winning combination, you can be awarded a prize. Activate the payout by landing from x3 up to x12 of the bat symbols with the three paying the lowest at 20 coins and twelve paying out 10 000 coins. 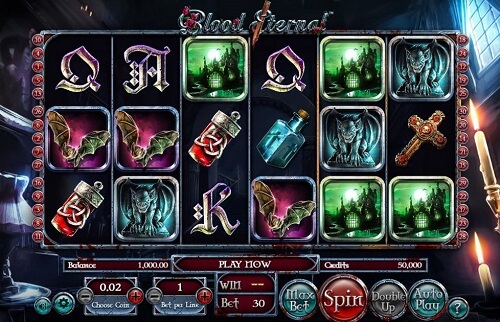 Blood Eternal is a fun slot game to play with its great bonus features for potential big wins. BetSoft has managed to produce a game that will win the hearts of players. Try your luck with the slot game and find out if you will be able to score the big jackpot. You can sign up with the casinos that we have listed below and play the game for real money to possibly walk away with real cash.