A Review of the Cashanova Slots Game

The Cashanova slots game from Microgaming is a 5 reel, 30 payline non-progressive. This video slots game comes with a scatter symbol, a free spin feature, a wild symbol, a multiplier and a maximum jackpot possibility of $37,500. The game is a deliberate play on words centered on what is known as the most eligible bachelor in history. The slots game is entertaining and engaging and is well worth the hype for all types of casino players. Cashanova includes three specific symbols on each of the game’s five reels.

These are of course continued within a reel case that resembles a henhouse. There are colorful reel markers that show how many coins are in play down each respective side of the screen while the buttons for the game are located underneath the reels with the exception of the paytable button. For more on the slot features and bonuses, read our review below.

The game’s symbols include the hen house mansion, fountains, pipes, fruit, fruit platter, champagne, whipped cream, and chocolate corn. Henrietta is also a symbol in the game. The egg, cashanova and henhouse magazine each trigger the bonus features in the slots game and each are very animated. Roger Rooster exhales to reveal a wild in smoke, the magazine plays a sound effect that is then followed by a wolf whistle and the other symbols flash when a win is made by the casino player.

The sound effects are pleasing and interesting and the voice of Cashanova resembles Foghorn Leghorn. Casino players have an abundance of betting options for this slots game that range from one penny to $75 per each spin so this game can be enjoyed by all types. The Roger Rooster symbol plays as the wild in the slots game, which essentially means that it has the ability to substitute for the other symbols in the game with the exception of the bonus and scatter symbols. 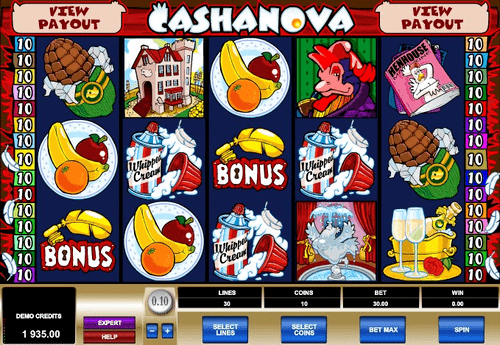 Three or more key symbols will trigger the bonus game where Cashanova has to find a lost gold key. The casino player is taken to a barn which contains a notable amount of hiding places and the casino player must select an object to search for the key. This feature is very animated with a variety of sound effects. Roger Rooster will reach the items differently by careening around the barn. Some of the boxes contain instant wins and one contains the gold key.

Casino players will find this slots game one of the best to come from Microgaming as there extensive ways to win that make for an enjoyable online gambling experience.