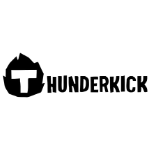 In terms of new internet and mobile casino software, Thunderkick software is the new kid on the block. The casino software brand is an independent supplier of slot games.  Thunderkick has offices in Stockholm and Malta. ‘We are Thunderkick, and we make games’ is the casino software’s slogan, and the company pays tribute to the slogan by producing high quality games. Thunderkick games have world-class graphics, speedily pages, and unmatched gameplay.

The software company may be relatively new. However, in their short time in the industry, they have just over 70 websites offering their portfolio of games.  Thunderkick is a daring and quirky software provider that has plenty of futuristic ideas which they keep executing in their slots. The games not only put the players’ experience first but ensure maximum convenience. Thunderkick also offers players the opportunity to try out their fun games for free before committing for real money at top us casinos.

Specializing in browser-based games, Thunderkick is slowly moving away from the usual download-only casinos. Thunderkick casinos are compatible with most mobile devices making the games accessible to players where ever they are. With the use of Remote Gaming Server, Thunderkick develops its games in a way that is easy for players to get a hold off and play. The innovative games are designed with different reel behaviors. In some of the titles, the spinning reels have been replaced.

Games such as Esqueleto Explosvio and Birds on a wire have drooping symbols. The ordinary reels have been replaced with symbols that either fall towards the player, fly off the wire or float, and splatter.  The games have wilds, free spins, and symbols that have to be aligned for a win like in other slots. However, Thunderkicks have reimagined the settings of ordinary slots.

The video slots and classic slots have 2D and 3D graphics. All slots are designed using HTML5. This technology allows for games to have glitch-free animations on desktop or mobile devices

The slots games offered by Thunderkick casino software are unconventional and lots of fun. The RTP for most slots is around 96%, and although the winnings seem large, they are not frequent. The software provider does not have an extensive slot portfolio and creates meaning to the cliché term “quality over quantity.” The video slots have an improved interface, unique themes, styles, and amazing soundtracks.   The developers keep players intrigued using titles that are short and obscure.

The Thunderkick casinos are some of the most reliable casino sites on the internet. The sites are licensed, offer players enticing welcome bonuses, offer Thunderkick games and games from other leading developers. The casino compliments the Thunderkick software with the same level of mobile compatibility. So, not only are the games mobile-friendly, but the casino in itself has a mobile counterpart. Some of the popular casinos which offer Thunderkick games include 888 casinos, LeoVegas.com, Unibet and William Hill

Thunderkick is a Swedish company which was founded in 2012. The casino software brand is licensed in the UK and Malta. Thunderkick casino software is certified in multiple jurisdictions, making it accessible in several locations across the world.

The level of state-of-the-art gaming offered by Thunderkick software provider is like no other. Not only have they reimagined the layout of basic slots. However, they have great graphics, and the soundtracks are just as great. The software provider does not offer any table games, nor do they have live dealer games, which is disheartening. The slot portfolio is also not as extensive, and considering all the amount of work that goes into creating their level of quality, the provider does not release new slots often.