If casino players are fans of the game of tennis, then the Centre Court slot game from Microgaming will without a doubt thrill them and bring them much joy. The slots game is a nine payline, five reel non-progressive video game that comes with many different features including a possible jackpot win of $2,500, a scatter and wild as well as a free spin feature and multiplier. Centered on the Wimbledon tennis match specifically, Microgaming designed the game to be one of the more interesting and fascinating sports themed online slots games.

The five reels in the game are divided and surrounded by the chalk that usually denotes a tennis court. The slots game has a varied mix of symbols that include tennis players, four in particular, as well as cups, a match point logo, and the usual 10, Jack, Queen, King and Ace that often show up in slots games from Microgaming. To find out more about the Centre Court feature, you can read our review below. We have also listed the best Microgaming casinos where you will be able to play the game for real money online.

How to Play Centre Court Slot

The symbols animate which makes for a slots game that is more fun. For example, the gold cup symbol in the slots game animates whenever a win happens. Each of the slots reels rotate slightly after each other and come to rest with the sound of a tennis ball. It seems Microgaming made certain that casino players feel as if they are playing right alongside the tennis player with this slot game. The sound effects are decent for an internet slot game. Casino players can bet in a variety of ways including playing 1 to 20 coins per each of the slots game’s paylines. The lowest bet is one penny and can go up to about $22.50 per spin.

When a win occurs, the button that is marked lines flips to show the word gamble. If the casino player presses this screen with a card deck in the center, then they can choose the suit color to try and double their win or quadruple it. There is also a chance, however, that the winnings can be lost in this aspect of the game. 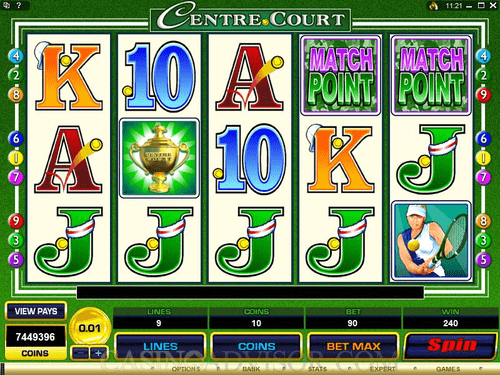 The Centre Court cup is the symbol that bridges the gap in terms of substituting for other symbols in the game with the exception of the scatters. It has a very fascinating animation when it bridges the gap. In addition to this, the casino player receives a total of 18 free spins when three or more scatters, which in this slots game are the tennis balls, show up. Each of the spins contains a multiplier of 2 times, 3 times, 4 times or 5 times. This is set per each respective spin. The wild symbol in the game makes an appearance as a scatter that is stacked and this is capable of filling an entire slots reel.

Casino players looking to engross themselves in a slots game that leaves no stone unturned in the creativity arena will find the Centre Court slots game from Microgaming one of the best to emerge in the realm of online gaming. With the jackpot available to them in the slots game, casino players may find themselves not wanting to stop playing once they begin.