From Cryptologic, Cubis is a non-progressive slots game that has no reels. Including 15 paylines, a wild symbol, a multiplier and a maximum jackpot-winning possibility of $200,000, casino players will find Cubis quite appealing and satisfying both in terms of theme and payout. Built on the theme of a puzzle, the average casino player would expect to see a traditional online slots game with reels, but Cubis has no reels at all. Instead, there are cubes.

How to Play Cubis

The features in the Cubis slots game include grey dice, which acts as both the wild symbol and the multiplier, substituting for other symbols in the slots game. The symbol also multiplies the line’s stake by whatever number is shown on the dice. There are three types of bomb cubes that casino players will be satisfied to see. These increase wins when they drop in.

The Cubis slots game also has what is known as a square bomb which blows a total of 25 cubes up with the same face. There is also a line bomb, which spreads fire in four different directions destroying cubes in its path. There is a nuclear bomb in the Cubis slots game as well that wipes the entire board clean. Each time a bomb removes cubes, they are immediately replaced with new ones, which further increases the chances that a casino player can win and win big. 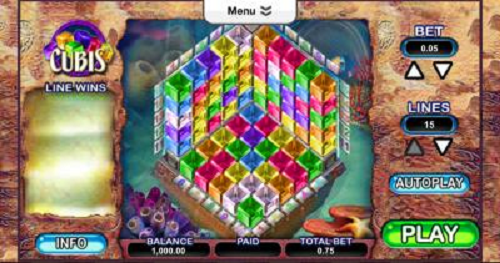 The Cubis slots game does not have a traditional bonus round, but this does not detract from the game’s impressive array of features. The trio of bombs makes up for the lack of conventional aspects that are normally featured in a slots game. Casino players looking for a significant monetary reward will undoubtedly find it by playing the Cubis slots game.

The jackpot is whopping as well, which makes for an entertaining, and fun slots game. Cryptologic is known for making thrilling games that pack a noteworthy punch in the area of winning and the Cubis slots game meets that reputation. The Cubis slots game can be found at every internet casino powered by Cryptologic software. Find more great games by reading our slot reviews.