The Exterminator slot game is one of the most interesting games from Betsoft surrounding the particular occupation. It is a 5 reel, 30 payline non-progressive slot that comes with a free spin feature, a wild and scatter symbol and has a maximum jackpot of $1,250 that casino players can take advantage of. Each and every Betsoft game is always accompanied by a significant amount of anticipation from slots fans because of their work and the Exterminator slots game is one that slots fans will be talking about. Find out more about the Exterminator slot game by reading our slot review below. We have also listed the best BetSoft casinos where you can sign up to play this slot game for real money.

The Exterminator slot game is an innovative release from Betsoft because the slot is a hilarious depiction of a chubby exterminator who is seeking to fight pests. He has however found his match in a raccoon that refuses to be caught. The raccoon teases him and invades the cottage. The game is very amusing and casino players will enjoy the audio and music effects that Betsoft added. In addition to this, there are of course special features that casino players can engage in. This slots game can be adapted to fit all casino playing preferences as there are a variety of bets that casino players can wager. The coin denominations begin at 2 cents and can reach a maximum of 50 cents. The slot game also provides casino players with the chance to play a total of five coins per each payline, which in turn boosts their betting amount to 150 coins per spin. 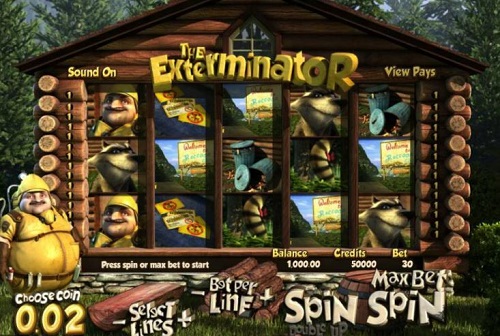 Features in the Exterminator slot

The first feature that casino players will find fascinating in the Exterminator slots game is the Sticky Win feature, which appears whenever a win is cored. The winning symbols remain stuck on the slots reels and the rest of the machine will then respin. All additional symbols of the kind that form a winner will remain stuck and this particular procedure will repeat as long as the casino player continues to get additional symbols. There is also a wild reel in the shape of the exterminator’s truck and when it appears in a sticky win, it expands once the feature is finished.

The Exterminator slots game also has a Double Up feature where casino players can attempt to double their winnings with the help of the chubby exterminator. It is important to note that these two mentioned features are difficult to get in the game. The free spins feature is triggered whenever five symbols of a footprint appear anywhere and the bonus round in the slots game is activated when five blueprint symbols show up on the slots reels. The symbols may come stacked and may also take part in the sticky wins feature, however, they do not always appear.

The Exterminator slots game from Betsoft is an interactive and cinematic innovation. There are lucrative prizes that can be won and when the casino player does, they are well worth it. Betsoft has managed to produce a game that leaves no stone unturned in the realm of casino gaming. Casino players may find themselves on their computer for a very long time with this slots game!