GAN, one of the leading software providers has done exceptionally well in 2019 so far as they reported a new record in revenue from its casino operations and sports betting in New Jersey. On 1 May, GAN released its trading report for the past three months in 2019, where the casino giant smashed their record by 122% higher than what they made in the same period in 2018 which resulted in US$4.6 million in revenue. In addition to this, they also made 5% more than what they made in their fourth quarter in 2018. Overall, GAN reported total earnings of USD$600 000, after they disclosed their net loss of $1.5 million in their yearly report. 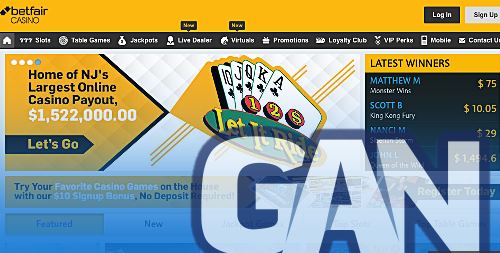 The gaming company reported to the media that the increase in their revenue was as a result of the more than expected growth in their sports betting operations, together with a significant cross-sell from sports betting online to their online casino websites.

Assuming they manage to keep this pace, GAN reported that they are expecting to achieve their full-year guidance where these good times keep rolling in the double-digit increase in revenue. On the other hand, the grown is also dependent on the regulators in Pennsylvania sticking to their casino and sports betting launch timetables, as well as the rate at which proficient marketing of Overseas Internet Casino takes place in the European regulated gambling markets.

This Overseas operation – WinStar.com was launched by GAN sometime in January 2018. This was done on behalf of the Oklahoma tribe, the Chickasaw Nation, which is also part of GAN’s Simulated Gaming casino products. So far, WinStar.com has reported a loss of approximately US$200 000 for GAN. As a result, they launched a new digital marketing company last year in September to help in boosting the website’s profile as well as customer retention.

GAN also stated that as of the 30th of April, they have a debt-free balance sheet with about US$8.6 million in the form of cash and equivalents on hand. Consequently, the online gambling company reported that there wouldn’t be any need for them to seek further additional financing, in preparation of the unforeseen future.

The company’s trading report didn’t mention anything related to its March announcement where they mentioned there’ll be a review of several strategic alternatives which was inclusive of chances of an absolute sale of the gaming company. The Chief Executive Officer of the company – Dermot Smurfit – chose to focus instead on the company’s hopes to land new clients and increase product option for its current clients’ contracts.