Microgaming is an impressive online gaming company that creates games that are memorable and notable. One of their holiday themed games is Gift Rap. The Gift Rap slots game is a 25 payline, 5 reel non progressive video slot. Casino players will be delighted to know that the game comes with a maximum jackpot winning possibility of $30,000 as well as a wild and scatter symbol. Casino players will without a doubt find Santa delivering handily in the winning department of this Gift Rap slots game. Find out by reading more in our review below.

Casino players can wager anywhere between one penny to fifty cents. They can put a total of 10 coins on each payline and with there being a total of 25 available, this essentially means that the casino player can wager up to $125. There is an expert mode in the game that is similar to the regular gameplay, but does not provide an automatic option. The expert mode in the Gift Rap slots game adds a total of three automatic play buttons, which can be used to place the bets.

The unique dynamic of this slots game is that it is centered on Christmas with rappers. Casino players can look forward to the staple greens and reds of the holiday season. Christmas cheer is the theme of the Gift Rap slots game. The symbols that are present in the slots game include snowmen, singing elves, rapping elves, backing singers, monkeys, hammers, spinning tops, drumming bears and a karaoke machine. There is a constant wind effect that plays throughout the slots game with sleigh bells also ringing with every spin that occurs. There are other sounds in this slot game that include the sound of the snowmen who are jack in the box. They rap and boing and this subsequently triggers the bonus feature in the Gift Rap slots game. 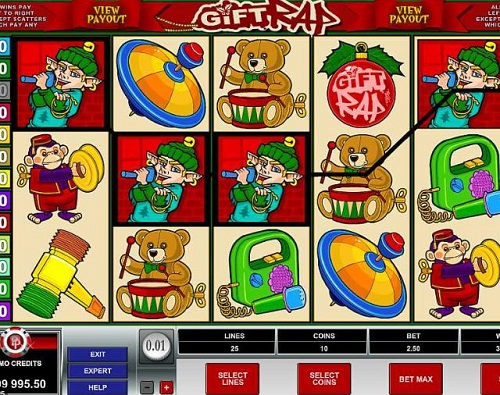 There are a few features in the Gift Rap slots game that casino players will love such as the wild symbol of the red bauble, which has the capacity to form winning combinations with every other symbol in the game with the exception of the scatters and the bonus symbols. If the casino player is able to obtain a total of five on a payline that is active, this will yield them a total of 6,000 coins. The snow in a can symbol is the game scatters. If casino players get three of these symbols, this will pay them a five times multiplier, while four yields a twenty times multiplier and five gives an eighty times multiplier. If casino players are able to get at a minimum of three or more snowmen in a box symbols on the slots reels, that opens the bonus game.