A new guitar-shaped hotel opened in South Florida earlier this month, becoming the latest tourist attraction in the area. The Guitar Hotel was welcomed with a grand opening celebration commemorating three years’ worth of work. The property measures 450 feet in height, has 34 floor levels, and forms part of the Seminole Hard Rock Hotel & Casino estate. 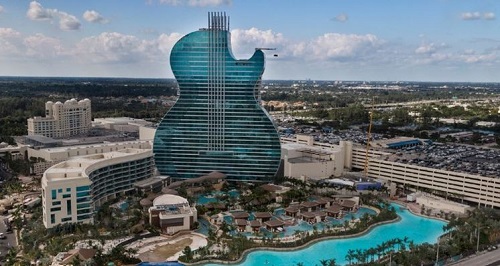 The Guitar Hotel is a first of its kind and has added a new element to Florida’s landscape. It features 600 guest rooms, as well as 168 guest accommodations. It also has a Hard Rock Live venue that accommodates 7000 people. There is also an Olympic size pool and lagoon fitted on the grounds, as well as many retail stores, clubs, dining restaurants, a theatre, and tons of gambling facilities.

The $1,5 billion project funded upgrades of various venues within the facility, which includes its dedicated concerts and events venue. Hard Rock Hotel and Casino hosted its first event there on the day of the grand opening which saw a performance by Maroon 5. Other upcoming events in the venue will feature artists like Sting and Billy Joel.

The design of the hotel is what is most intriguing to viewers. People are frequently spotted taking pictures of the hotel, and can be seen by travellers in airplanes coming into Fort Lauderdale. CEO of Hard Rock International, Jim Allen was quoted sharing his thoughts on The Guitar Hotel. He spoke about how he once dreamed of designing a hotel shaped like a guitar, and how that vision materialized. He also spoke of the brands potential to be marketed internationally now with all the growth it’s been experiencing.