Home » How to Bet Against People in Multiplayer Roulette

How to Bet Against People in Multiplayer Roulette

Multiplayer games have started popping up in a lot of web-based casinos over the past few years. They have gained a lot of popularity. One of the reasons that they have seen so much success is that they reintroduce the social aspect of gambling. Land-based casinos allow players to talk and interact because they have to meet in person, but web-based casinos do not. Games like multiplayer roulette give you a chance to chat with players and bet against them. This simple addition can bring the games alive and create an extra dimension of fun.

In roulette, players are betting on the outcome of a single spin of a wheel. One way to make roulette more interesting in a multiplayer setting is to bet against another player. Creating a friendly rivalry like this can help to build an emotional investment in the game that makes it more fun to ride the wins and losses. If your chosen opponent is betting on even money bets, then all you have to do is bet the opposite way. For example, if your opponent bets red, then you should bet black. If he or she bets even, then you should bet odd. It’s easy to see how this idea works, and these simple bets can create an atmosphere that is significantly different than playing roulette by yourself. 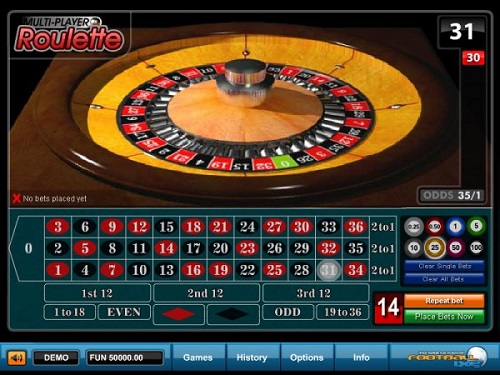 When players aren’t betting simply even/odd or red/black wagers, then it can become a little more complicated to bet against someone. If a player is betting on a single number, then you can bet on the opposite color and opponent even/odd so that your wins are always their losses. The idea is that you want to line things up so that you’re going to be winning as much as possible when your opponent loses. However, you want to avoid making bets that are too complicated to be practical. An example of over-complicating your bets against a player who is betting on a single number would be to bet on every single other number than the one your opponent has bet on.

The same ideas that we have presented here for betting against players in multiplayer roulette can be used to bet along with another player. You don’t always have to make the exact same bets to play along with a player, but you should share some of the same winning numbers.