Home » How to Play Keno

How to Play Keno

At first glance, learning how to play keno may seem difficult. However, the lottery-like casino game is fun and easy to play. It is also one of the games that are popular amongst US players online. No wonder more and more people are interested in learning how to play keno at a casino. Keno is played similarly in online as it is in top rated casino sites. Keno is played differently to the lottery and the upside of the game is that players need not wait for a draw. 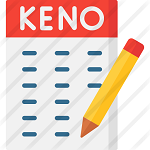 Similarly, the lottery keno is a game of numbers and luck. The main aim of the game is to predict many correct numbers as possible. Web-based keno is played using a random number generator which is used to draw the winning numbers. Depending on the numbers you match correctly you will get a payout.

Keno has a few distinctive features which differ from likeminded casino games such as bingo and the lottery. Luckily, for American players, we have put this how to play keno guide together to help US players learn how to play and win at real money keno. Read on for more.

US Casinos to Play Keno Online

How do you Play Keno and Win?

How to win playing keno is straightforward, and we will be discussing the simplicity in the sections below. However, before then, you need to know that online keno is played using a card with numbers from one to 80. You have to choose any numbers between the previously mentioned number range. You win when any of the numbers you have picked have been picked by the random number generator from the 80 numbers.

1. Select the Numbers to Play

When you play keno for real money, you will have to choose up to 10 numbers you want to wager on. However, some casinos allow you to pick more than ten but only up to 15. The winning numbers are randomly selected, and 20 numbers are drawn as the winning numbers. Your 10 or 15 numbers have to match from the 20 that are drawn to win big.

To play keno online real money games players have to make real money wagers. There is a different way that you can choose to make a wager. Most players prefer to choose a lot more numbers and the number of times they will play with a lower bet. While some prefer to have a high-stake wager for only a few numbers. However, you have to choose how to play keno and win real money.

Winning at keno online usually depends on the number of numbers that were chosen and how many overall hits that were achieved. If there was a single keno number that was chosen, and that particular number hits, the player receives a total of three coins. The coin’s value is dependent upon the size of a coin that was selected at the start of the keno game.

4. How to Win at Keno : Use Strategies

There is no set method on how to win keno every time. The house edge for playing keno is 20% which is higher than most casino games. Hence, if you are interested in playing online keno, you need to know the odds of the game and what is the likelihood that you will match numbers. Also, find a keno game with a good paytable. The best option for you on how to play keno is to play fewer games and place bigger bets. Keep in mind that the game is random and there are no predetermined numbers, and there is no way to judge the frequency of the number.

Learning how to play keno and win almost seems impossible when considering the likelihood of your numbers matching the ones picked by the RNG. Here are our top five tips players can use to improve their chances of winning.

Best Numbers to Play on Keno

Some of the most popular numbers that people play in keno include their birth dates, anniversaries and birthdays of partners and relatives. Most people regard these numbers as their special days and lucky numbers. Playing special days has proven to be fortunate for others; however, there are other number groups players can benefit from playing.

Hot Numbers are numbers are frequently drawn numbers which can be determined by looking at the last 50 keno results. The same goes for cold numbers which are the numbers that hardly make it to the draw. Furthermore, players can look at finding their 10 to 15 keno numbers from lucky numbers. Examples of lucky numbers include the number 7, which is considered lucky in North America, the Chinese regard the number 8 as their lucky number and the number 3 is a favourite in Italy and Sweden.

FAQs About How to Play Keno Lottery

How many numbers do you need to win in Keno?

This depends on how many numbers you bet on. For example, you can be a winner if you chose to bet on six numbers and three are a match. However, if you bet on ten numbers and you match three you lose. What’s more, should you bet ten numbers and none match you get $3 back if you made a $1 bet.

How do you play the lottery game Keno?

Choose the number you want to wager on, select the wager amount and decide the number of draws to play.

How do you win at Keno?

You win real money playing keno when you have matched enough numbers to the 20 numbers that have been randomly selected.

What are the odds of winning Keno?

When you match the numbers that have been drawn, your winnings will be dependent on the numbers you chose to wager on and how many numbers matched.

Where can I play live Keno online?

There are not a lot of casinos that offer the option to play live keno online. However, you find safe and regulated sites that offer this option for US players

Check out our other keno guides: