A Review of the Jenga Slots Game

The Jenga slots game is a non-progressive from Cryptologic. It includes a wild symbol, a free spin feature, a scatter symbol and a $1,000,000 winning jackpot possibility. The slot game is a skillfully crafted game that takes a considerable amount of patience to play but offers a wow factor in its payoff. Casino enthusiasts have noted that they never thought they would see a Jenga slot game, but Cryptologic made it a possibility.

It is important to note that Jenga officially endorsed Cryptologic to create the game. The background of the slot game can be changed with a simple click and can also be locked using the game’s lock button. There is a background for each type of player – from the novice to the expert. The blocks in the slot game are colored and every combination of three or more ensures a win for the player.

How to Play Jenga

Cryptologic’s creation of the Jenga slot game allows for a multitude of winning possibilities. Every winning combination removes the blocks from the Jenga tower and places new ones atop which can also create more wins for the player. If the tower happens to become extremely tall and collapses, the player is given a new free game. After the particular game has ended, the winnings associated with the previous game that was toppled are added to the overall payout.

The maximum of 18 lines can be lowered to nine. If the player opts to bet with a low amount, the betting begins at two cents and goes up to $20. This creates a betting range starting at 0.45 and going up to $450. The slot game also has an autoplay feature that can be accessed from the left side of the screen. There are a variety of speeds and configurations that can be changed by the player.

There is an enormous amount of winning potential for players if they seek to play a game that requires mental skill and a vast amount of fortitude. The main gameplay of the Jenga slot game is complemented by a number of special features that include magic blocks. The magic blocks assist the player in creating what is referred to as layer bombs, which have the capability of destroying two, four, or eight layers of the lower part of the Jenga tower. This, in essence, produces a substantial amount of winning power if achieved. 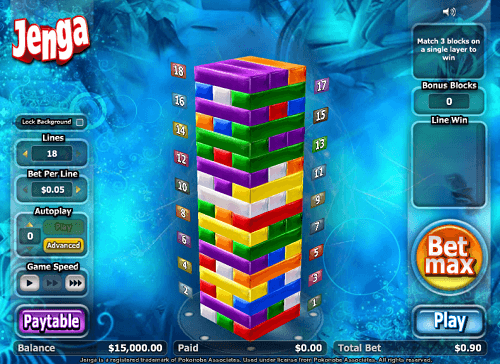 About the Wooden Blocks Jenga

Jenga is known as a game of both mental and physical skill. Originally crafted by the Parker Brothers, it translates to mean to build. The usual game is played with a total of 54 wooden blocks. Each respective block is three times as long as its width. The game first emerged as a children’s game in 1970 and quickly became extremely popular. Originally created by Leslie Scott, the game has a Swahili aspect to it. Cryptologic has definitively created a mirror image of this exceptionally fun game.

The Jenga slot game from Cryptologic is very entertaining and engaging and should not be missed!.