Did you enjoy the blockbuster film Jurassic World? Well, enter a disastrous theme park that for some reason will not get shut down despite multiple death claims in Microgaming’s official Jurassic World slot game! Go on the adventure of a lifetime and see dinosaurs as you have never seen them before in this wonderous slot game, which promises to reward players in ways that may soon allow them to purchase the fossils of the animals they see spinning across the screen.

If you would learn more about how to play Microgaming’s Jurassic World slot game, make sure to stick around! Below we have a good look at the gameplay and bonus features available in this extremely popular game. Our experts also give it a final rating and tell you whether or not it is a game for US players to take a chance on. So, what are you waiting for?

Jurassic World is a five-reel, 243-way slot game produced by Microgaming. As has come to be expected from film-inspired slot games, a lot of the imagery is derived from the source material, such as images for symbols, soundtrack and background.

Although some publishers may struggle a bit with adapting images for their themed games, Microgaming does so gracefully so that the game appears crisp and enjoyable to look at. Characters do not look like badly pixelated versions of themselves as been seen before in other titles.

All symbols are theme-related with all taking the form of characters from the movie and dinosaurs, among others. Examples of dinosaurs include a velociraptor, stegosaurus, and the deadly Indominus Rex! The film’s logo acts as the wild symbol and allows players to complete winning combinations. The scatter symbol takes the shape of the amber-encased film logo, which can double as a wild if two appear on the reels at the same time.

There are many bonus modes in Jurassic World, which is extremely exciting for US players who are interested in trying the game. It all starts with the free spins mode, which players activate by landing three or more scatter symbols on the reels. Players will then be taken to visit one of three places randomly:

In addition to the free spins feature, the Indominus Rex also activates a random feature that allows you to win three to five times more than your initial stake on random spins. 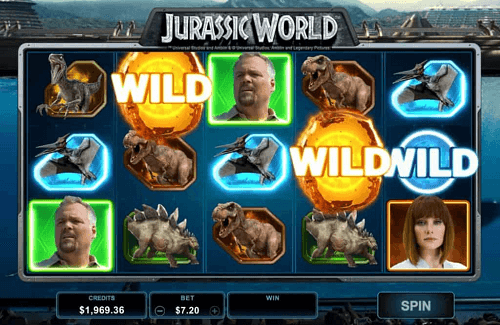 Jurassic World is a wonderful slot game with a load of bonus features that give players the chance to win astonishingly large sizes of money. We recommend that US players who are able to give it a go do so at Microgaming casinos, which unfortunately do not operate in the United States. Due to the fun our slot reviewers had with the game, we have decided to rate the Jurassic World slot game 5/5! It really is a fitting follow-up to the original (which, arguably, cannot be said about the movie itself.)