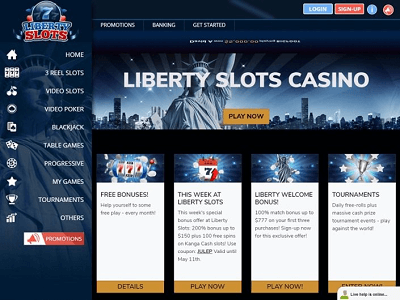 Liberty Slot Tournament – Let’s start by taking a look at some of the latest daily, weekly and monthly online slot tournaments that you can take part right now and over the coming days at a top US casino called Liberty Slots. Starting today, Thursday 7th April is the April Showers slot tournament. This one-day event has a $5.00 buy-in fee. You can play to win a share of the $500 prize pool. In today’s April Showers slot tournament you get to play on a slot called Movie Magic.

This is a daily slot tournament which will continue to run throughout April. This tourney will always have a $5.00 buy-in fee and a $500 prize pool to play for. Some of the other slots you get to play on throughout April in this event include:

You can find a complete tournament schedule by visiting this page: http://www.libertyslots.eu/tournaments.

Let’s now take a quick look at one of the latest big wins that recently occurred at Liberty Slots. Towards the beginning of the year, Brian J. netted an incredible winning streak that came to almost $200,000. When speaking to a casino representative, Brian said, “I was playing with free money, but I was still cautious to start, betting pennies a line on various slots.”. He then went on to say, “When I had a couple of wins, I boosted my bets.”

The manager and spokesperson for the casino, Mark Ramirez, also commented on this incredible winning streak, saying, “I’ve never seen a run like it in all the years I’ve been in this business. We give out a lot of these $10-$15 coupons to encourage people to come and try us out but we’ve never had someone get quite so lucky.”

He continued, “Fair play to Brian though, his strategy was impressive! He upped his wagers when he was winning, played a number of different machines, took his chances and rode his luck. This is what it’s all about. When you see those photographs of people in Vegas pumping their fists with excitement — this is what they’re seeing.”

Liberty Slots casino is powered by downloadable and non-downloadable WGS Gaming software and if you sign up here today you can claim up to $777 over your first three deposits. Each of these first three deposits is a 100% match worth up to $259, but you need to deposit using an e-wallet such as NETELLER or Skrill. If you use an alternate method to deposit, you can claim a 100% matching deposit bonus worth up to $100 instead.