The Mermaid Millions slot game is one set around a fantasy marine kingdom. Microgaming pulled out all of the creative power with the innovative Mermaid Millions slot game. The slot game is a 5 reel, 15 payline slot game that offers players an ocean of winning potential and possibilities to win substantially. With jackpots of up to 37,500 available on the player’s maximum bet, with a net, the player can pull in a massive fortune all in one sitting.

The game is produced and developed by Microgaming and is an imaginative casino slot game where the maximum bet that a player can make is 75 coins, which makes it appealing to both novices and advanced players. If you are interested in this Mermaid Millions slot and want to know more about the game features and other things related to it read our review down below. We also have a list of the best Microgaming casinos where you will be able to enjoy the Mermaid Millions game and many other titles.

The Mermaid Millions slot game has the typical fare including wild symbols, a scatter as well as two bonus game features. The game has controls for adjusting the sounds as well as the speed of the spinning. The scatter symbol in the game is the Mermaid. Get three or more Mermaids and that triggers the Free Spins Bonus Game, in which the player receives 10 free spins. With two or more Mermaids, there is also a payout of tremendous proportions.

The Neptune is the wild symbol and can be used to substitute for another symbol, except the scatter or bonus symbols, in order to complete winning combinations. The bonus symbol in the game is a Treasure Bonus symbol that triggers the Treasure Bonus game. During the bonus feature, the player takes a trip to the bottom of the deep blue ocean in the kingdom and is presented with a variety of different shells and treasure chests. The player is then asked to select three to claim their prize. If four or five treasure chest bonus symbols happen to trigger the bonus game, the player is rewarded with four or five chests instead.

With this particular slot game, the player is able to obtain random payouts more so than traditional Microgaming slots. If the player obtains five Neptune symbols that give them additional winnings of a 7,500 coin payoff. The Clam and Jewel Box symbols each have a max payout of 500 coins when five of them show up on a payline. Microgaming continues to provide exceptional slots games that give casino players multiple ways to win. The Mermaid Millions slot game is no exception. 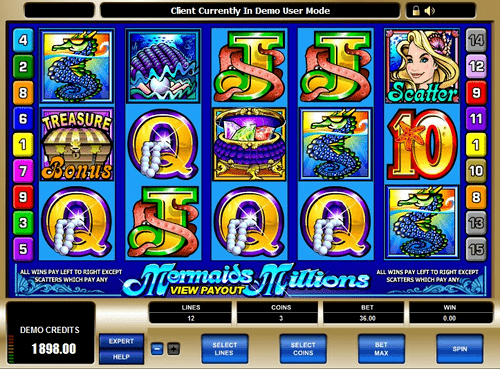 Players will be astounded by the many chances they receive to win and win notable amounts of coins to cash out on. Swim with King Neptune and come away with the game’s biggest jackpot or win smaller amounts and find an exhilarating journey under the sea with Mermaid Millions.

Microgaming is one of the leading online gaming developers and producers and prides itself on creating games that offer dynamic graphics and sounds that are exceptional. If players are seeking a slot game that is impressive, creative and quite entertaining, then this Microgaming creation should undoubtedly be something that casino players find fun and exciting.