MGM Springfield’s revenue has undergone it’s first yearly analysis and everything but gambling revenue shows a promising future. The company’s executives celebrate the first anniversary of the casino’s opening in Springfield, Massachusetts this month. Job numbers, visitor numbers, and investment saw positive growth. However, on the other hand, gambling revenue isn’t performing as well as the company had expected. They are struggling to keep up with its own projections. 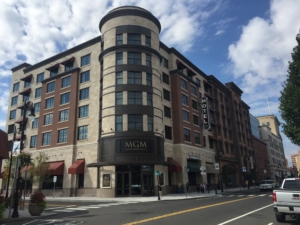 When MGM applied for the license in Massachusetts, the company told the state’s regulators that the casino would generate $412 million in gambling revenue in its first year. Now, at the end of July/beginning of August the company reports US$253 million. That’s US$159 million short of their projection. And this doesn’t bode well for MGM Springfield’s bottom line with the state expecting to collect 25% tax on their revenue.

MGM Springfield president and COO, Mike Mathis, says that their predicted revenue was realistic at the time but times have changed with a tightening casino market. “We’re a little bit behind, say, our first-year projections,” Mathis told reporters. “But I feel really good about the trajectory of it.” However, that trajectory hasn’t been moving up. Two of MGM’s worst three months were in June and July this year as there was new competition with the opening of the Encore Boston Harbor in eastern Massachusetts.

While the hotel and restaurants are performing well, contributing to different tax revenue streams, it seems like they underestimated local competition. Mathis said they may not have taken the long-established tribal casinos in Connecticut seriously. “I think we may have underestimated that level of loyalty, and what it would take for those customers to give us a shot,” he said.

For more on the latest casino news in the USA, keep it locked on BestUSACasinoSites.