A player from Michigan won the instant lottery jackpot for the second time in less than a three-year span. A 50-year-old by the name of Mark Clark from Monroe County first got lucky back in December 2017. He repeated the feat on June 4, 2020.

He struck gold from a $30 instant lottery scratch-off from the Ash Market convenience store in Carleton. Lady luck has been smiling in Mark’s direction, as he scratched off a $150 million ticket to find a $4 million cash prize.

According to reports, the instant game featured only three winning tickets of the $4 million grand prize, and Mark had the last ticket. Clark credited his good fortune to a coin that his father had given him a decade ago. He suggested that it may be his lucky coin that made him a multi-millionaire again.

It is hard not to buy in to the suggestion of the good omen that the coin may have had for the Michigan patron. Millions of players frequent local stores for tickets and play online scratchies hoping to win a life-changing jackpot. The odds of winning millions of dollars twice over is unimaginable.

As it stands, the $150 million jackpot prize of the Michigan Lottery is still yet unclaimed. Clark revealed that he retired from his job when he won the first time. He used the time to spend with family, which included fishing with his father who passed away last year. 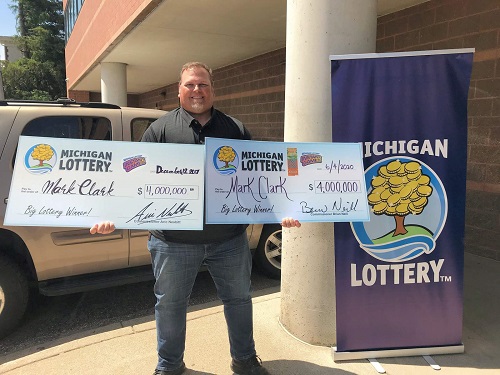 What Happens When You Win the Lottery?

There is a standardized payout plan that players who have won can choose from:

If you think you have what it takes, try our trusted online scratch card casinos to see if you can win a life-changing jackpot too!