The Munchkins slot game is a non-progressive, 15 payline, 5 reel experience. Players can immerse themselves in a wild symbol, a scatter, a free spin feature and a maximum jackpot of $75,000. Microgaming created the Munchkins slot game and added exceptional features that make this game one of the most interesting to come from one of the best gaming makers ever.

The theme of the game should not fool the casino player as these Munchkins are not pretty to look at. In fact, they are quite the opposite, finding the keys, wallet and whatever else they can on the slots reels to chew up. The sounds and the graphics of the game are very cool to listen to particularly when the casino player hits a winning combination.

How to Play Munchkins

The slot offers a variety of features that include a gamble feature, which is very thrilling and exciting. Players can wager anywhere between 1 penny to $0.50, which essentially allows for a total bet up to $75 along with the game’s 15 paylines. The features of the game are where the fun really lies. The wild symbol in the game is a light blue that substitutes for all of the game’s other symbols with the exception of the scatter symbol in order to complete winning combos. If the players happen to land two or more wild symbols, they will score themselves a notable payout. The ticket the max jackpot is to obtain a total of five wild symbols on a maximum bet.

The scatter symbol in the slots game is an Oreo cookie, which means that if the player gets two or more of these cookies that happen to show up on the reels. The player will find these yummy to see. The scatter symbol is the trigger symbol for the free spins feature. When the feature is enabled, the player will be awarded 20 free spins when three, four or five scatters land on the slots reels. Each of the wins is then doubled in this feature. The best aspect of this is that the feature can be retriggered.

In addition to these features, there is the gamble feature. Following a win, if the casino player clicks the gamble button, they have the opportunity to double or quadruple their winnings. In order to double their win, the casino player has to guess the color of the card correctly, either black or red. In order to quadruple the winnings, the player has to guess the suit correctly.

The player is given the chance to guess again if they have guessed correctly before, but they must be careful. If the player happens to guess amiss, then they will lose their total winnings. This particular aspect of the Munchkins slot game may be something that the player may not want to partake in but this video slot game is very fun. 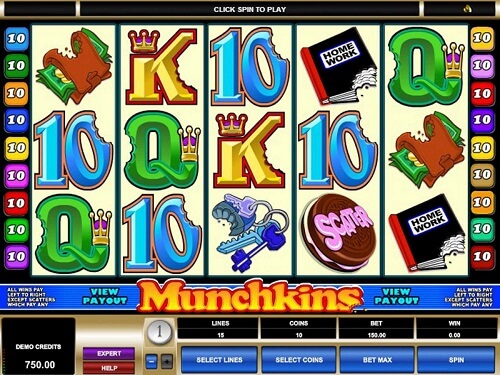 The Munchkins slot game is quite a feat from Microgaming with its distinct features and ways to win!