Pirate-themed slots give you the chance to experience what life was like as a swashbuckling buccaneer. Sail the seven seas as you spin the reels and take your chance at earning the treasure of a lifetime!

So, if you are interested in throwing caution to the wind and taking riches you feel you rightfully deserve by force, take a look at our list of the top 5 pirate-themed slots. Each of these games will give you the chance to have some fun as a legendary 18th-century sea outlaw.

Pirate Isle features everything you think of when the word “pirate” comes to mind. Buccaneers, skeleton keys, flags with a skull and bonuses, and a treasure chest filled with booty!

Lead Captain Redbeard and his band of misfits as he takes you across the world in search of other ships to pillage and plunder for riches. With exciting bonus features and a 10,000-coin jackpot, you may live to tell this tale.

It’s plain to see that Betsoft took a lot of inspiration from Pirates of the Caribbean when creating Barbary Coast. The game’s Ben Sawyer looks eerily-similar to Johnny Depp’s Captain Jack Sparrow. The game also aims to create a story similar in vein to the famous Disney pirate saga, which will captivate many players.

In addition, Barbary Coast has got a low return-to-player percentage for a Betsoft game at 93.2%. But this medium variance game promises big prizes and some very creative bonus features, which includes a free spin bonus instant prize. 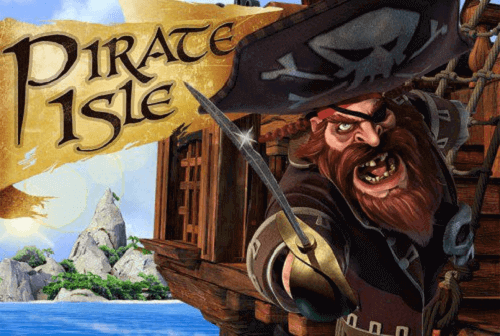 Not to be confused with the weird horror film of the same name, Ghost Ship is a Realtime Gaming classic that is built on the famous Flying Dutchman legend. Players sail the seas hoping to find the Dutchman and steal its treasures.

The game has a wide bet range, a solid free spins bonus, and a return-to-player percentage of 99%. As Ghost Ship pays out frequently, its jackpot is slightly lower than other games on this list, but that’s a small price to pay for some actual wins.

Bluebeard’s Gold is a pretty looking adventure pirate-themed slot game offered by Arrow’s Edge. The clean designs are a nice break away from many of the traditional illustrations we see with older developers like Realtime Gaming and Rival.

Gameplay-wise, the title has a massive jackpot and a wide range of betting options. With a strong return-to-player percentage, you have got the chance to win big here!

Jolly Roger’s Jackpot is how we have chosen to end this list. The game has an amazing design that looks similar to older video games than a slot game. The game actually uses the real Blackbeard instead of a knockoff with a different colored beard.

With multipliers aplenty, you stand a good chance of winning enough cash to buy rum aplenty should you please!

Check out our other slot theme guides: