The story of Pinocchio is a classic that most American players are familiar with. The general theme of the story is that a wooden boy puppet has several adventures while trying to become a real boy. Because of copyright issues, the Pinocchio slot had its official name changed to “Wooden Boy” at several casinos.

However, American players will immediately recognize it for what it is. Even though this game has a classic story and a strong brand, it stands out as being a feature-packed video slot that is a lot of fun to play. Read our review for more.

The Pinocchio video slot has five reels with three symbols showing on each reel. There are 20 different paylines that a player can bet on at once. Players can only bet up to one coin on each of the paylines, but there is a wide range of available coin sizes that starts at $0.01 each and goes up to $5.00 each. This means that there is a total betting range of $0.01 to $100 available. This is plenty of range for players who like all stakes.

The Pinocchio symbol shows up on the first, third and fifth reels, and it is the wild symbol in this slot game. Even though this symbol only appears on three reels, it expands vertically whenever you get it. So if you get a wild Pinocchio symbol on the first reel, then all three symbols on the first reel become wilds. This helps to lower the volatility of the game since you’re more likely to get several small or medium wins on the same spin, but it also helps you to rack of major wins when you pick up expanding wilds on multiple reels.

The Turquoise Fairy (wink wink) symbols are scattered in this game. If you get three or more of them on the reels at the same time, then you get a shot at a free spins bonus feature. What’s really cool about this bonus round is that you can triple the size of your wins if you use a Pinocchio wild symbol to make the winning combination. 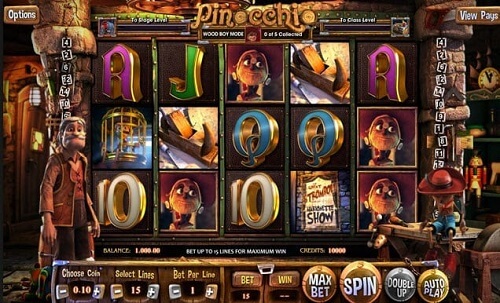 This game is based on getting several payouts on an individual spin, so it’s single-line payouts are smaller than average. However, the expanding wild symbol makes it easy to pick up multiple wins on the same spin, and this is what drives the concept behind the Pinocchio video slot.