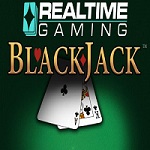 Blackjack rules and strategies are easy to follow and understand when it comes to Realtime Gaming casino games. There are basically four types of blackjack at Realtime Gaming-powered casinos based on how many decks are used and whether or not players have the option for a late surrender (Bovada offers this option, for example). Usually, there are four decks used, but some casinos have a two-deck setup instead. The dealer always hits on a soft 17 in these games, and you can double any two cards that are first dealt. You can also double on splits, and you can split up to twice in a single hand. These rules lead to a fairly favorable game that gives a 0.58 percent house advantage at worst, as long as you play with the correct basic strategy.

Playing with two decks under the Realtime Gaming rules gives the house a slightly worse advantage, so your payout rate will be higher, and this is why you can be slightly more aggressive with your doubling in the above scenarios. With two decks, the house advantage is 0.34 percent with the late surrender and 0.40 without the late surrender. Along similar lines, it’s 0.49 percent in the four-deck game if you’re allowed a late surrender, and it’s just 0.58 percent if that play is not allowed.

Blackjack is one of the best games at RTG casinos from the perspective of the payout rates. The correct basic strategies are not difficult to learn, and it’s harder to make mistakes than in non-standard video poker variations. Overall, you should find out if your game uses two or four decks as soon as possible, perhaps by emailing the support team of your casino, so that you can make the best plays available.