Redskins lose to the 49ers shortest games in NFL history

The Washington Redskins went up against the San Francisco 49ers in dreadful rainy conditions this past Sunday at the FedEx Field. The match saw the Redskins lose 9-0 to the unbeaten 49ers. Both teams ran the ball 65 times, leading to the shortest NFL game in 10 years. The average NFL game this season has been 3:07:01 which is 5 minutes shorter than the average NFL game. The FedEx field is a natural surface field meaning the game was played on grass both the weather conditions and field condition contributed massively to the homecoming gaming results and gameplay. 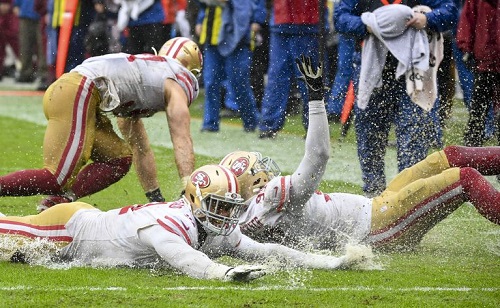 The game duration was only 2 hours and 36 minutes. The last time players saw a short NFL game was in 2009 when the New England Patriots beat the Jacksonville Jaguars 35-7. The Patriots and Jaguars had a combined 61 running plays. The football was kept on the ground 53.5 percent of the time. The Redskins and 49ers had a combined 103 plays and ran the football 65 times. The football was kept on the ground 63.1 percent if the time. The teams were tied up at 0 at halftime, and none of the teams scored a touchdown. The game started with the Redskins running back Adrian Petersons covering ten consecutive runs. The Redskins missed a 39-yard field goal while the 49ers missed a 45-yard field goal in the first half. The goal-scoring drought was brought to an end when San Francisco 49ers, Robbie Gould scored a 28-yard goal in less than six minutes of the third quarter.

The loss was not to the 49ers was not the worst for Redskins fans who had placed bets on their favorite. Fans of the NFC East cellar team won their even bet despite the Redskins not scoring a point. The Washington Redskins become the second team in 25 years to cover a spread without scoring. The team was 9.5/10-point underdogs going into the game.

The Redskins may have made gambling history however the loss to the 49ers means the team has to buckle down for a redeeming play against the Minnesota Viking on Thursday. Oddshark has placed the Redskins as a 14.5-point underdog. Since 1996 there have only been six games that have been shorter than the game between the Redskins and the 49ers. Apart from the relentless rain, the 49ers had outstanding defense and The San Francisco 49ers remain unbeaten.

Slotland Game of the Month