A Betsoft creation, the Rockstar slot game is a 3D slot that has a total of 5 reels and 30 paylines. The slot game is a non-progressive that comes with a multiplier, a wild symbol and a maximum jackpot possible win of $2,500. If the player is looking to have their epic solo with a guitar, the Rockstar slot game might just be up to their alley. The slot includes three specific features such as the themed bonus round as well as an actual guitar solo.

The Rockstar slot game from Betsoft starts with one of the best scenes for an online slots game with a band backstage that is preparing for their gig. The band hears the shouts from the crowd and the slot game starts.

The entire game is built around the rock and roll theme of flashing lights, has styled buttons as the Rockstar logo at the top. The buttons in the game that are styled include a drum kit spin button, a coin selector in the shape of an amp and dual guitars. The slot reels are full of rock and roll symbols and rock stars.

The symbols in the Rockstar slots game are magazines, groupies, rock stars, whiskey bottles, gold and platinum records, contracts and VIP tickets. Each symbol is exceptionally created from one of the most well known online gaming developers. The symbols are also animated when a winning combination happens to spin in.

The music in the slot game is also cool. It works superbly with the overall theme of the game and is a nice change from other games that do not impress with their background game music. Players looking to press their luck with the game can begin betting at 0.02 per each spin. The player can also choose from one to thirty paylines and up to a total of five credits per each line. This, of course, creates an entertaining betting range of 0.02 to 150 per each slot spin.

If three, four or five red and black guitar icons happen to appear on an active payline, then the slot game’s Epic feature will start. This will select three prizes at random for the player and the amount of credits is then added to the player’s total winnings. Three or more VIP ticket symbols that appear on an active payline will begin the feature known as are you ready to rock? This is actually a bonus round. During the round, the player is awarded coins based on a style of the game, Guitar Hero. If the player hits the big win, the whole group will invade the screen and give him or her a significant amount of winnings that will be added to their balance. 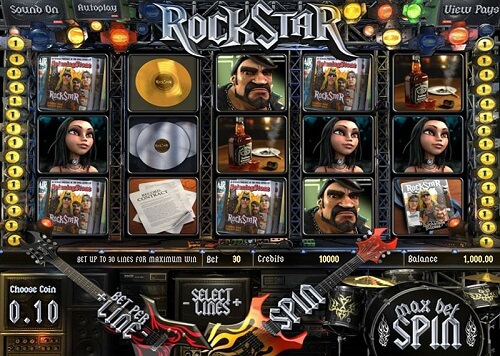