Secret Symbol is a slot game developed by Realtime Gaming. This RTG slot was launched on desktop (Flash and download) and on mobile. It’s available in the real money mode and free play demo mode.

It has an Aztec/Ancient Civilization theme with 5 reels and 25 paylines and it has some great sound effects with robust colours and the occasional in-play animated sequences. The two main special symbols to keep an eye out for on this game. Including the Scatter Symbols and the Wild Symbols. There are two progressive jackpots to play for including the Minor Jackpot and the Major Jackpot.

The free spins bonus will instantly trigger when three or more of the scatter symbols land in any position across the reels. With each free spin, a random new multiplier will be revealed. These free spins multipliers can boost your wins by as little as 1X up to a maximum of 20x. There are no other second screen bonus rounds or in-play features on this game. Still, the free spins can be retriggered and don’t forget that there are two progressive jackpots up for grabs. 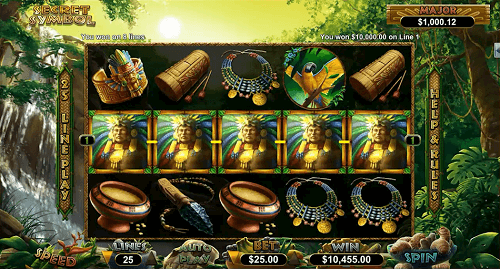 Where to Play It

If you want to play on this online slot right now, head over to sites below. You can sign up for a real money account to win on this slot game.