From Microgaming, Shoot is a 5 reel, 50 payline nonprogressive sports slot. Casino players that are huge fans of sports will find this slots game one of the best they have ever played. It comes with a scatter, a wild, a maximum winning jackpot-winning possibility of $20,000 and a free spin feature. The largest aspect of the game is the sport that it deals within this case, soccer. Soccer is one of the most well-known games in the world and Shoot is both spirited and colorful in that regard. Essentially, the slots game’s designers, Microgaming, created and crafted one that even those who are not excited about soccer could enjoy it. The slots game is spiced up with background sounds and an audience that gives the casino player inspiration to shoot.

Casino players of all types can experience the Shoot slots game including high rollers, and low rollers as the denominations start at one penny. This colorful slot game can be accessed in most, if not all online casinos that are powered by Microgaming. The options range from being downloaded by the casino player to being in instant play mode. Casino players who love the idea of kicking a soccer ball will find that with Shoot, they can win up to $20,000, which is quite a reward. The creators of the Shoot slots game, Microgaming, developed a variety of tools for the casino player to use at their disposal including a choice between expert and regular play, as well as statistics option.

The wild symbol in the Shoot slots game is written in the word: shoot and features pictures of legends in the game. Casino players looking for a very straightforward slots game will find that Shoot is definitely that. It is entertaining, exciting, thrilling as well as fascinating and gives nod to the legendary sport of soccer and the many celebrities that have emerged in the game throughout the years. 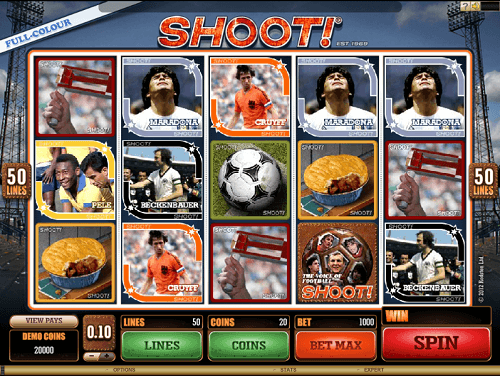