We recently learned that the official launch date for Betsoft Gaming’s new SugarPop 2 online slot is Friday 23rd February. The SugarPop 2: Double Dipped online slot from Betsoft will be launched simultaneously on desktop and on mobile and it will be made available to US players in the real money mode and in the free play demo mode. You’ll be able to launch this game instantly in your web browser without the need to download any kind of software onto your computer. 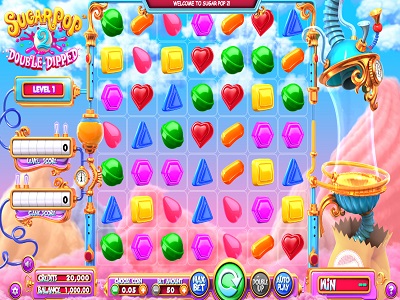 The new SugarPop 2 slot from Betsoft Gaming has a Cluster Pays Feature with Cluster Wins and Exploding Wins. Rather than having a standard payline format where three or more matching symbols have to line up across the reels, a winning combination is formed on this game when four or more matching symbols appear clustered together across the reels, either vertically or horizontally adjacent to each other.

If you haven’t ever seen this exciting feature in action this may sound a little complicated to begin with but it should become clear after taking just a few spins on this game. The same feature is also active on the prequel to this slot, Betsoft Gaming’s SugarPop slot, which has been available in casinos for more than two years now and is one of Betsoft Gaming’s more popular online slots.

It’s also possible to level up on this game and after every fourth level that you make it to extra Special Candies will be added to the reels and these all perform their own exciting in-play features. There are 29 levels to climb through and some of the special candies to keep an eye out for include the Gumdrops, Caramel Chews, Candy Canes, Lollipops, Fizzy Pop Candy, Jelly Bean Cannons, Morphing Golden Wilds and Sweet Hammers. You can also win big during a Free Spins Bonus which will trigger when four or more Scatter Symbols appear grouped together.

“Betsoft believes in a game’s flow: the way the mathematics function, the sounds and animations, the speed in which things happen and the order in which things happen,” said Betsoft Gaming’s CTO, Dan Cooper. He then finished by saying, “All of these various elements play a synergistic part in the creation of a game…the closer to perfection each element becomes, the better the resulting game performance can be.”

We managed to obtain these exact comments directly from a recent Betsoft Gaming press release. Don’t forget to check out this hotly anticipated new online slot as soon as it arrives on February 23rd at several top-rated casinos such as Drake Casino, Gossip Slots, Bodog Casino and Bovada Casino.

Slotland Game of the Month

Win A Day Casino Game of the Month

What Does the Joker in Pai Gow Mean?