Journey back to Arabian times with Sultan’s Gold. This slots game allows casino players to discover their inner Sultan as they unearth the mystery scatters and life of luxurious opulence that the Sultan lived. The objective of the online slot game is to obtain winning symbol combinations by spinning the 5 reels. There are 20 paylines on Sultan’s Gold.

The paylines are activated and their shape is displayed by clicking progressively + and – below the lines. The active paylines are indicated by the lines that appear over the various reels. In most slots games as with this one, there is a slight variation between the total bet and the line bet. The line bet typically displayed how much is being wagered on a particular payline whereas the total bet displays what is being bet in total on the round of the game. The payouts for Sultan’s Gold are shown in the paytable.

How to Play Sultan’s Gold Slot

The game does not require it to occur on a particular payline. If there are three or more scatters in any position in the results of the spin, the payout that is given to the casino player is then multiplied by the total wager and thus added to the winnings. If three or more scatter symbols happen to appear on any of the reels during either the Free games or the main game, then ten free games with the mystery scatter are won by the casino player.

The mystery scatter can be one of the symbols in Sultan’s Gold other than the Palace symbol. During the round of Free Games, the symbol will behave in a scattered manner in terms of not having to occur on any payline specifically. The payout is given to the player based on the original symbol and the paytable associated with it when the Free Games round was started. During the Free Games round, the Sultan’s Gold reels spin automatically utilizing the same number of bets per line as on the spin that brought about the Free Games round. Following each subsequent spin, the win that the casino player receives is shown in the field marked win. 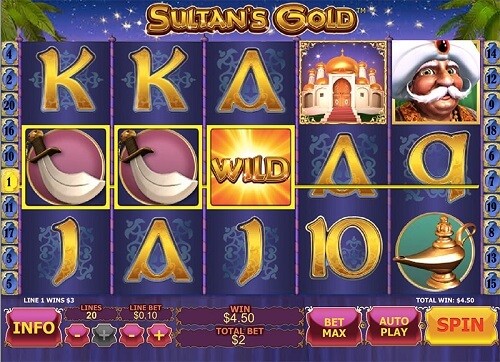