Get ready to don your mawashi with Microgaming’s exciting sumo wrestling inspired slot – Super Sumo! Created in collaboration with studio Fantasma Games, Super Sumo gives players the chance to win massive prizes as they compete to become the best competitor in what is one of Japan’s favorite sports.

This medium variance slot can be played for real money or for free at all of the best Microgaming casino sites on both PC and mobile. Players will be excited by the fact that there is a relatively low minimum bet amount and a high maximum bet amount, meaning that the game appeals to a wide range of players.

If you would like to learn more about the thrilling Super Sumo slot game, make sure to read on. Below we have a look at the title’s gameplay and overall experience, in addition to giving players a recommendation on whether to play it or not. So, find out whether Super Sumo is the slot game for you now!

Super Sumo is a slot game with five reels and 25 paylines. As mentioned above, the game makes use of a sumo wrestler/Japanese theme, with imagery on the screen being created to fit that theme. As has come to be expected with Microgaming slots, the game features stellar graphics, with some symbols being borderline kawaii.

Symbols in the game are made up of a mixture of both the standard card symbols (10, J, Q, K, A) stylized very similarly to Japanese glyphs. The theme-based symbols largely take the form of sumo wrestlers with different emotions, including exciting, sad, angry and fearful, among others. The excited looking wrestler acts as the wild symbol, whereas the red circle with the words “Super Sumo” acts as the scatter symbol.

There are three major bonus features to look out for in Super Sumo. These include the following: 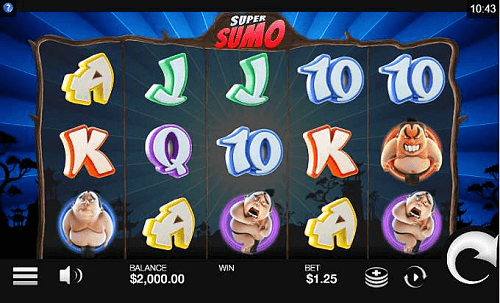 Super Sumo isn’t your average Asian-inspired themed slot game. Instead of ancient mysticism, it makes use of a less explored part of Japanese culture creating for an experience that just seems new and original. We didn’t particularly enjoy the fact that bonus features are so hard to trigger, but overall it is a good game. We here at BestUSACasinoSites.com give it a four out of five ratings.