A non-progressive slots game, Angel’s Touch is an Amaya video slots game that comes with 40 paylines and 5 reels. Players can delight themselves in an abundance of features including a scatter symbol, a wild, a free spin feature and a maximum jackpot-winning possibility. The theme associated with the game may seem a bit unusual – angels and gambling, but Amaya found a way to incorporate the two into a slot game that is both innovative and easy to play. The slot game encompasses a variety of different symbols including trumpets, harps, heavenly bells and other symbols. 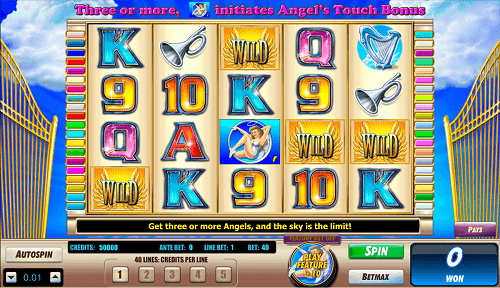 Amaya also made sure to include sounds and effects that are angelic. Players have a variety of options in terms of betting. Due to the wide range amount of bets, this allows the game to appeal to both high and low rollers. The coin denominations begin at one penny and go up to $5, thereby making it easy to place up to 5 coins per each of the 40 paylines in the slots game. The features of the Angel’s Touch slots game are very simple but provide heavenly rewards. The scatter symbol is the main aspect of the slots game. The angel in the game is the scatter and this symbol triggers a bonus feature when three or more of them show up on the slots reels. This particular feature does not occur often during the game, but the casino player can substantially increase their chances of winning and winning big when they see this symbol.

The Angel’s Touch slots game is one of the most fascinating online games to emerge from Amaya. The player can also increase their chances of winning by placing continual bets as once the player is able to obtain the game’s side bet feature, they are subsequently prompted with a total of 8 clouds that reveal multipliers. These multipliers can be used in the free spins that the player receives. The player must avoid the devils, however as once two are revealed, the bonus feature ends and the free spins start with the multipliers that have been rewarded to them thus far.

Players will find themselves immersed in a slots game full of several ways to win and music and effects that are exceptionally created. Amaya left no stone unturned with the creation of this particular slots game and casino players will notice this the minute they begin playing this slots game.