The Madder Scientist Slot is a step up from the original Mad Scientist slots game from BetSoft. This 3D slots game is a 5 reel, 30 payline non-progressive that has a maximum jackpot win of $1,250, a free spin feature, a scatter and a wild symbol. This slots game has all of the greatness that Mad Scientist had and then some. The scientist has come up with more colourful potions, rewarding spins and explosive bonuses. Casino players will undoubtedly find this BetSoft slots game a moving and exciting one.

How to Play The Madder Scientist Slot

The coin betting amounts range from $0.02 to $0.50. Additionally, BetSoft added markers that introduced the chance to play up to a total of five coins per each payline, which enables the maximum wagering amount to be $75. The best aspect of the Madder Scientist slots game is the special features.

One of the most interesting special features is the reel re-spin feature, which gives casino players the chance to pick a reel and re-spin it after a spin. This is done against a fee that depends on the chance to win or trigger another special feature if the correct symbol happens to land on that particular reel. There are truly noteworthy prizes that can be won with the assistance of this feature in the Madder Scientist slots game. 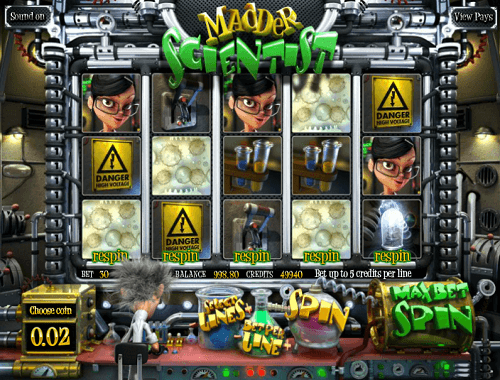