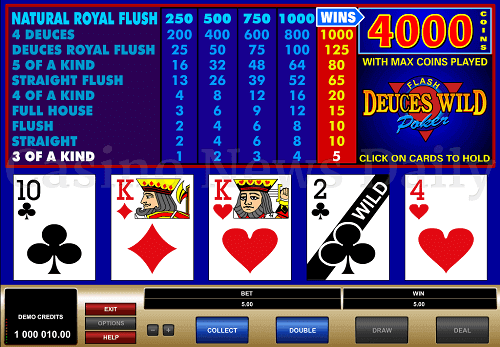 This game is so important because full pay machines that are land-based will have a payout rate that is slightly higher than 100 percent. This means that you can actually make money from playing video poker if you are good enough and pick the right games. To get this good at Deuces Wild video poker, you have to learn how to handle very tricky situations with wild cards. The wild card aspect of Deuces Wild makes it a much more complicated game than something like Jacks or Better, and it also makes it much harder to play well. The hardest situations to learn are the ones where you have a single wild card, and we’re going to look at some tricky situations where you only have a single two in your hand.

Suppose you are dealt with 2c 9h 9s Ts Qs. With this hand, you have a few different ways to play. You could discard the ten and the queen to play with three of a kind. You could also discard the nine of hearts and play for a straight flush draw. If you have a made hand that is three of a kind, a flush or a straight, then you should only draw to the straight flush in single-deuce situations where the three straight flush cards are in a row. This means that we should keep 2c 9h 9s and discard Ts Qs in this particular situation.

Now consider a slightly different situation where we have 2c 9s Ts Js Jh. Like the previous situation, we have a choice between a straight flush draw and three of a kind. However, all three of our straight flush cards are in a row this time, so we should discard the Jh and go for the straight flush draw instead of keeping the three of a kind. This is the most common type of hand that Deuces Wild players get tricked on, and it’s the most important kind of hand to learn before you can become an expert player at Deuces Wild video poker.