The True Illusions slots game is a 30 payline, 5 reels non-progressive from Betsoft. Casino players will be astounded by the game’s design and graphics. The game comes with a scatter symbol, a wild symbol, and a free spin feature. The maximum jackpot that can possibly be won is $3,750. The True Illisions slot is a non-progressive game. The quality of the game is some of the best that Betsoft has ever produced in its online gaming software. Our review on True Illusions slot includes all an explanation of the special features as well as the slot symbols to make playing the slot ten times easier.

True Illusions’ Slot Them and Symbols

With the slots game, casino players will discover that the prizes and rewards that they receive are no illusion whatsoever. The magic, in fact, has a superb and exceptionally generous face, which will make casino players wish that a game such as True Illusions was created sooner. The theme of the game is centered around the world of magic, with the main character being a magician, who does tricks to entertain casino players while they play. One might think that that will interfere with their play, but the slots game has too many benefits for it to do so.

The symbols in the internet slot game are the magician himself, a deck of cards, his female helper, white doves, a hat, a magical linen tissue and other items that allow him to create illusions that bring the casino player rewards. The game also has symbols such as a locked wild, a regular wild, and a scatter, which triggers the free spins feature. Also, the game has a bonus symbol that is activated with instant credit prizes.

There are plenty of options when it comes to winning and winning big in the True Illusions slots game. In order to cash out of the game, however, the casino player should consider their investment capabilities first. There is plenty on offer, of course, that range from 2 cents to $1 and the slots game provides the possibility to place a total of 5 coins per each respective payline. If casino players keep this in mind, this gives them a significant range to satisfy all playing habits and tastes. The True Illusions slots game from BetSoft has a tremendous amount of special features. 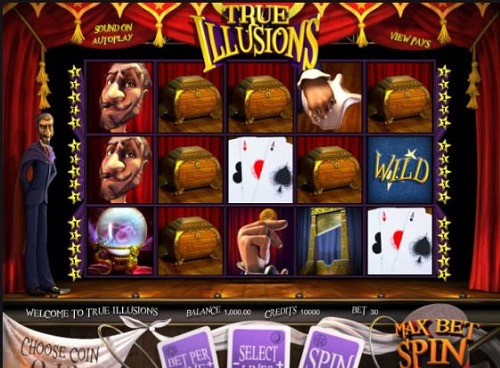 In terms of the True Illusions’ special features, the wild symbol appears stacked and replaces all of the other symbols in the game when it does. When three of them appear on the 3rd slots reel, they remain locked there for a total of seven spins, which brings the casino player some excellent and exciting prizes. This is known as the Wild Reel feature. Before it begins, the casino players see the magician give a performance. Regarding the scatter symbol, three or more of them that appear anywhere on the reels begin the free spins features. These are no ordinary free spins. Whenever the casino player wins during this feature, it creates a cascade that leads to even more wins.

Another interesting feature in the game is the second screen, which happens when three or more card symbols appear anywhere on the screen. During the second screen feature, the casino player must select a card from the deck that will reveal the prize that they receive. It is just another generous aspect of the True Illusions slots game.