Home » US Department of Justice Reverses Verdict on Online Gambling

US Department of Justice Reverses Verdict on Online Gambling

The Department of Justice back-paddled on their 2011 rule to allow internet gambling in the United States of America. Specified in the U.S. Wire Act, all forms of online gambling were barred, with the exception of sports betting. This move is set to put a halt in the internet casino gaming while the government gets embroiled in a legal battle with the states that introduced intrastate online gambling. Read our article on the issues that lead to the DOJ revisiting its decision on internet gambling in the US. 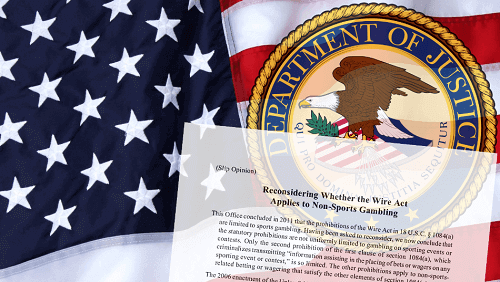 In 2011 December and late last year, the interpretation of the Wire Act of 1961 was a got topic for the United States DOJ. The opinion formed in 2011 had changed the interpretation of internet gambling, only applying to online sports gambling. This initial ruling favored operators that sought to supply intrastate casino games, the lottery, and poker gambling. The law that stood for 50 years stated that it prohibited “the transmission in interstate or foreign commerce of bets or wagers or information assisting in the placing of bets or wagers on any sporting event or contest.” Following further discussion regarding the grammatical use of the term sports, the opinion was formed that it was too ambiguous to apply to all forms of gambling.

Is Web-based Casinos Legal in the USA?

The Department of Justice’s Criminal Division got the ball rolling in its pursuit to prosecutes illegal gambling in America. The Assistant Attorney General for the Office of Legal Counsel (OLC), Stephen Engel, expanded on what the new interpretation would mean for online gambling in the USA.

“The 2011 opinion, in our view, incorrectly interpreted the limitation on any sporting event or contest to apply beyond the second prohibition that it directly follows: the prohibition on transmitting ‘information assisting in the placing of bets or wagers’,” he explained.

While the opinion is merely that, an opinion and not binding, it does open a can of worms for the future of online gambling in America. The matter is still going to be deliberated in the courts, and players can use the time to maximize their profits at any of our legal casino sites online.