Western Wildness slot game from Rival Gaming is a non-progressive video slots game that comes with a total of 20 paylines and 5 reels. Casino players will find themselves in an abundance of features with the Western Wildness slots game. Some of the features include a maximum jackpot-winning possibility, a scatter symbol, a multiplier, wild symbol, and free spin feature. The video slots game is centered on the theme of the American wild west. The graphics in the game include a video introduction. ival Gaming in creating this particular slot game ensured that they brought an aspect of authenticity to it.

Western Wildness was created to suit all casino players. From the low rollers to the high rollers, every casino player has the potential to win and win big in this particular slot game. The wagering begins at one penny and goes to a total of $0.25 with the maximum amount of coins that can be wagered being 200. Casino players can also aim for the jackpot of 500 coins by playing the maximum amount possible. In this slot review, we will look at all the features that make up this game.

The symbols in the Western Wildness slot game include cowboys, cowboy boots, a shotgun as well as sheriff badge. The scatter symbol in the game is the symbol of the ox. This scatter triggers the free spins feature in the Western Wildness slots game. The wild symbol in the game is a wheel, which can substitute the other symbols in the game to form winning combinations. This particular symbol, however, does not substitute for the ox symbol, which is the scatter in this slot game. 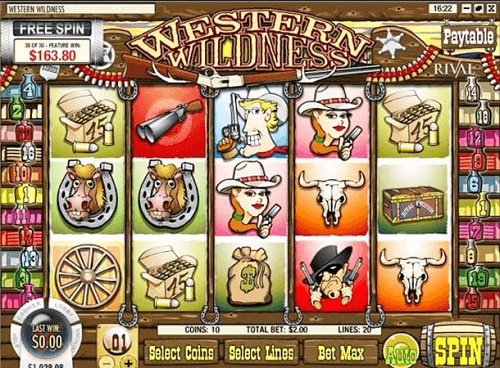 Casino players looking to win and win big will find that they can do this with the Western Wildness slot game. It includes a variety of features that provide excellent ways of increasing one’s coin amounts and walking away from the slots game with a significant amount of money. Rival Gaming is known for creating exceptional slots games. The Western Wildness slot game not only accomplishes that goal but will undoubtedly surpass the expectations of any casino player that decides they want to be entertained with a video slot built on the theme of the American wild west.