Inventor Charles August Fey is credited with having invented the first-ever mechanical coin-operated slot machine in 1894 while working as a mechanic in San Francisco. Although this game never really gained traction, its follow-up the 4-11-44 proved to be extremely popular in Saloons.

So popular, in fact, that Fey soon resigned from his job to make slot machines full time. Although the 4-11-44 and its predecessor are considered to be the first slot machines ever created, they did not faithfully resemble the game as we know today. 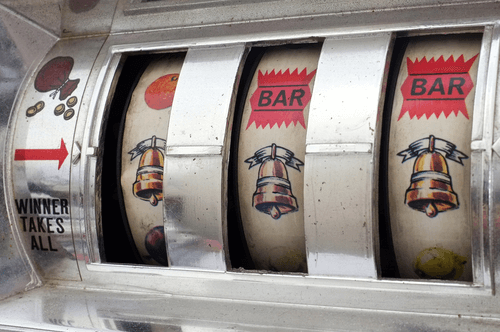 The first slot game to feature cash payout, three-reels and a handle to spin the reels was the Card Bell. Fey developed the game in 1898. Symbols on the reels needed to line-up to make poker hands. However, it wasn’t until his next machine that slot machines really took off.

If you ever wondered why bells and horseshoes are often used as slot machine symbols, it is because these are the images that Fey chose to use on the Liberty Bell. (Fruits would only become popular symbols in 1909 after a similar machine was created by the Industry Novelty Company that awarded players gum.)

Only 100 Liberty Bell games were ever created and the games were only available in saloons across San Francisco. Despite this, word of the game’s popularity spread and soon many copy cats were created. Perhaps, the most notable was that of the Mills Novelty Company in Chicago.

Following the ban on slot machines in San Francisco in 1909, Fey moved to building machines which dispensed drinks and cigars and did not feature a coin slot. The ban eventually led to many slot producers to leave the city.

Today, only four Liberty Bell games are still in existence. Many were destroyed as a result of the 1906 earthquake in San Francisco, which absolutely decimated the city.