Whenever we discuss the latest big winners, we generally talk about the wins that occurred at one of our featured US casinos, but the incredible jackpot win that we will be taking a look at here occurred at a Microgaming powered casino which currently does not accept real cash wagers from US players. We decided to give this win a mention because it is the largest ever jackpot paid out by an online slot machine, breaking a new world record.

The UK player, 26-year-old Lance Corporal Jonathon Heywood, is an Afghanistan veteran soldier who beat the previous payout record just that was set by a NetEnt slot called Mega Fortune back in January 2013. This latest win came just after midnight (GMT) on Wednesday 7th October 2015. He won a life-changing £13,213,838.68 which is approximately US$20,000,000.00. The winning amount shown on the real-time progressive jackpot ticker will always be paid out in the currency that the winner was playing in and in this case the winner was playing in Pound Sterling (GBP). 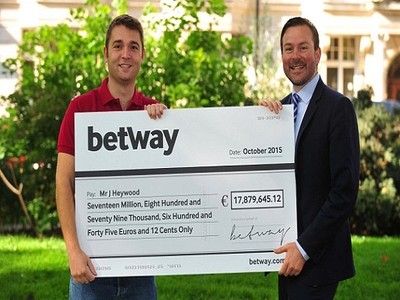 The lucky winner said, “It’s all so surreal, and I can’t come to terms with it just yet, I just kept staring at my screen and seeing this huge number in my Betway account.” His 54-year-old father, Douglas, is currently waiting for a heart and lung transplant and Jonathon will be spending as much of his winnings that is needed to get his father the best possible medical treatment.

A European cruise for his family and a brand new yellow Bentley Continental GT are also both on his new wish list. Rather than receiving his incredible windfall in monthly instalments, he received his winnings in one lump sum from Betway Casino. A spokesperson for this Microgaming powered casino, Alan Alger, said, “We are delighted for Jonathon and having met him the day after his win we can honestly say that it couldn’t happen to a nicer young man. We hope he really enjoys the World Record win.”

Why Do Casino Withdrawals Take So Long?