A Review of the Snow White Slots Game

It has been said that fairytales come in all shapes and sizes. Many are known and some are not as well known, but one that everyone knows or at least has heard of is Snow White. The Snow White slots game is a 20 payline, 5 reel non-progressive slots game from Cayetano. It comes with a free spin feature, a maximum base jackpot of $250,000, a scatter and a wild symbol. Casino players looking to help Snow White along her journey will find themselves intertwining with a significant amount of rewards for doing so.

The slots game comes with dwarfs that work with Snow White, a fateful apple and Prince Charming. Each of these symbols assists the casino player in their journey to win the maximum jackpot of $250,000. The slots game takes a while to load but is quite an impressive sight when it does. The slots reels have a forest theme with a mineshaft for the dwarfs, a cottage as well as trees. Casino players may even spot a castle on the horizon, while each of the slots paylines are marked with precious stones. The music from the Snow White slots game is calming and peaceful.

A harp plays as the reels spin. Many of the symbols in the game are also very animated and have their own sound effects as well. The characters that can be seen in this slot game include Snow White, the Queen, the Prince, the Magic Mirror, the mine entrance, a glowing glass casket, apples, and the 10, J, Q, K and A icons which are adorned with flowers.

The Snow White slots game has a plethora of options to choose from in the betting arena. From 1 penny to $25, casino novices and advanced casino players will find that they enjoy this particular slot game. While the betting is fascinating, nothing is more innovative than the features the Snow White slots game brings casino players. The evil Queen is the wild symbol in the game and can substitute for any of the other symbols, with the exception of the bonus and free spin scatter symbols. The Queen appears during both the free spin feature as well as the normal gameplay.

Three or more symbols of Snow White that happen to show up on the slots reels will begin the dwarf’s journey home. The casino player can select one of the dwarfs to employ their sack, which contains diamonds. Each respective sack has a certain number of diamonds in it. The numbers are tallied up to become the total bonus multiplier that is awarded to the casino player. 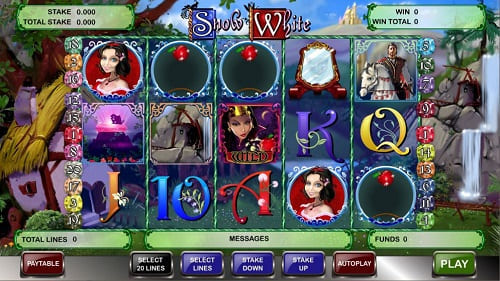 The Snow White slots game leaves no turned untouched in terms of being exact in matching the classic film and in its design to reward casino players for playing it.