Home » What Does It Mean To Double Down In Blackjack?

One of the most favorable situations in the game of Blackjack is when casino players are afforded the chance to double down. When doubling down, the casino player is allowed to double the wager following the receipt of the first two cards. At that point, you then receive one card in your overall hand. For the most part, internet casinos and casinos in general, allow you to double down on any two cards. There may be limitations to certain doubling at some casinos, especially in hands that total a 10 or an 11. 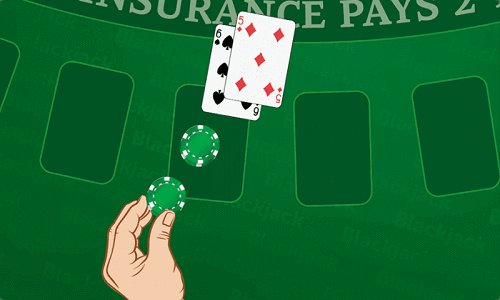 Dynamic of Double Down

Another interesting dynamic of double down is when the casino allows you to double after you split. Casino players note that this has an effect on the house edge. If you are playing a game of Blackjack and there are eight decks that are being used, and the casino is allowing you the opportunity to double on anything; the house edge is usually around -0.55%, which is a little more than half of 1%. There may be other rules pertaining to doubling that may either increase or reduce the edge of the house. For example, the house edge for doubling after splitting goes from .13 to -.42%. Doubling on a 10 or an 11 take the edge from -.21% to -.76%. If you the casino player opts for such a strategy, it can be reasoned that the double down is strictly mathematically based and favors you when beating the casino dealer. For the majority of the time, the dealer is usually at their weakest when a double down is in play.

For all casinos, both land and online-based, the two through six cards are the worst cards for the dealer. The dealer will bust more times with these particular cards showing. This makes your double down all the more probable of being successful. There are other circumstances where the casino player (you) will double down with a 10 against the casino dealer’s 9 for example, or an 11 against the casino dealer’s 10. These are known as close cards and most casino enthusiasts suggest not doing this. Even though you may not be as successful with this strategy, it is still a possible winning strategy and may prove extremely profitable in the long run. Some casino players are hesitant in general to double down because they do not want to lose their double bet. A good rule of thumb in the game of Blackjack is if the wager size is making you sweat, it is likely that you are at a table that is out of your league. Many casinos will often let you double down for less that your initial wager, as long as it meets the minimum requirements of the table. This is another favorable situation that you should take advantage of.

Doubling down in the game of Blackjack can be very lucrative. When you choose not do double down, you are not necessarily playing incorrectly, but you are not seizing the moment and striking the iron while it is hot, as doubling down substantially increases your odds and lowers the house’s edge.