Home » What Is The Difference Between Omaha And Texas Hold Em?

What Is The Difference Between Omaha And Texas Hold Em?

Omaha and Texas Holdem are the two most popular poker variants of this era that you can play online or at land-based casinos. While they are similar in that the best hand will win, there are also a few differences between teh two. But what are these differences between the two poker formats?

From the rules, making hands, betting structures, and complexity, we look at it all. We also give you our opinion on which game is better to play. 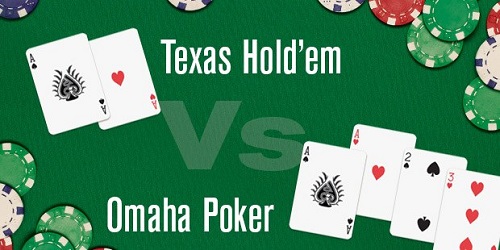 For starters, the number of hole cards before the flop in the game is different. In Omaha, every player is dealt four hole cards, while in Texas Holdem, every player gets two hole cards. This allows for making big hands in significantly easier in Omaha.

Secondly, the number of hole cards that you have used in each game is different. In Omaha, you have to use two hole cards, whereas, in Texas Holdem, you can use anything between both to none of the cards.

Making hands is much easier in Omaha than in Texas Holdem. It is because, with Omaha, you are dealt four cards rather than two. For these reasons, Omaha tends to get more action. Especially from players who don’t understand the strength of hands well.

Both games can be played using a fixed-limit, no-limit, or pot-limit betting structure. This is all dependant on the type of player that you are. However, each variation has a popular betting system which is most generally used. The preferred betting structure for Omaha is pot-limit. Finding No-limit Omaha games online is possible, but there are few and far between.

The most preferred Texas Hold ’em games are the no-limit games. This is part reason why Holdem is the most preferred game. Poker games have moved from strictly offering fixed limit formats to allowing players to enjoy the risk that comes with no limits.

Which Game is Better?

Deciding which game is better between the two will depend on several things and the type of player. For instance, Texas Holdem has a simpler strategy, and it will be hard to pinpoint weak players.

Omaha gives plyer a better chance of creating winning hands. This is simply because of how the cards are dealt.

All in all, both variants are good to play, and you can make decent money at both. Hold ’em is the more popular game and easier to learn, whereas Omaha is more complicated, but the profit margins can be higher. if you would like to try both games, make sure to do so at these top poker sites that we have reviewed below