What is Shift™ from Betsoft Gaming?

Shift™ from Betsoft Gaming is a platform that leverages the software giant’s industry-leading expertise in HTML5 development, into a next-generation platform for Desktop gaming. Launched in November 2016, the new Shift™ desktop gaming platform from Betsoft is the framework upon which Betsoft’s cutting edge games are built.

Speaking in November 2016 about this new technology was the VP of Sales and Marketing at Betsoft, Mark McKeown. He said, “Our new Shift™ platform represents the next step in iGaming evolution, and is a tremendous milestone for the both the Company and the industry.”

He then went on to say, “While HTML5 has been a standard for some time, it is only just now that the technology and hardware have matured enough to allow for the standards of quality and visual excellence for which Betsoft games are known.”This new platform has basically been designed to make the most of HTML5 technology which is now the global standard platform that every computer and handheld mobile device will continue to support for the foreseeable future. “We are extremely proud to introduce Shift™ as a comprehensive solution for future game development,” added McKeown. We managed to obtain all of these comments from the official Betsoft Gaming website.

Shift™ manages to simplify development and deployment of Betsoft games and it has resulted in a simpler, faster and more secure system for both the operators and the players as there are no longer separate Desktop (Flash) and Mobile (HTML5) versions. This new platform relies on no third party plugins and you still get to enjoy the same true 3D cinematic gaming, stunning HD graphics and cool animated sequences that Betsoft has become famous for on both existing games and also on any new games that arrive in the future.

It utilises an entirely new animation engine which basically runs much more efficiently than Flash which is nearing the end of its life. The games can now truly be enjoyed the way there are meant to be. This new animation engine provides a much higher frame rate and the in-play animations are remarkably smooth and even more impressive. 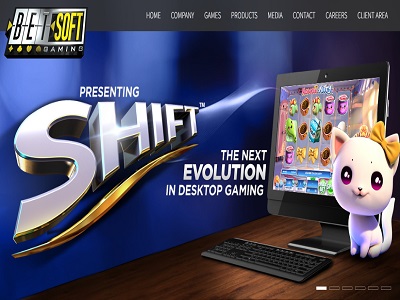 Betsoft Gaming has become famous for ground breaking 3D online machines such as Greedy Goblins, Dr. Jekyll & Mr. Hyde, Gypsy Rose, The True Sheriff and Weekend in Vegas and if you live in the US fancy playing on any of these games right now, you need to head over to top USA casino sites such as Bovada Casino, Gossip Slots and Drake Casino.

If you love playing on these top-rated slots you may also want to check out games like Charms & Clovers, Kawaii Kitty, Pinocchio, Good Girl Bad Girl, Birds, A Christmas Carol, 4 Seasons, The Tipsy Tourist, Frankenslot’s Monster, WhoSpunIt and At The Copa.