Lincoln Casino is one of our top-rated USA casino sites. It’s one of those unique internet casinos that’s different to all the rest. For example, this fully licensed US  casino is powered by a casino software provider called WGS Gaming. Many of our other top-rated US  casinos are powered either by Realtime Gaming, Rival Gaming and/or Betsoft Gaming. If you’re are based in the US and if you’re looking to play in an online slot tournament where you can win real cash prizes.  Sign up to this perfectly secure casino to win on a daily basis.
They have a unique game selection and you get to play on a wide range of online slots throughout these daily events that run throughout the month. We can start by taking a quick look at some of the upcoming Daily Slot Tournaments that you can take part in at Lincoln Casino. All of these events have a guaranteed $100 prize pool to play for and they last for 24 hours. 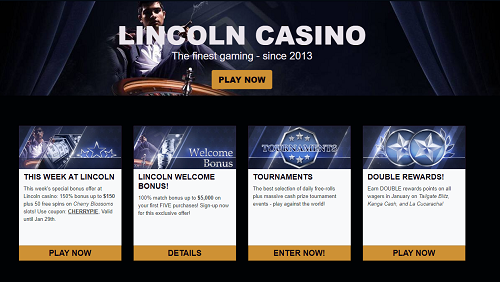 The great news about the Lincoln Slot Tournaments is that they are generally ALWAYS free to enter (otherwise known as freeroll slot tourneys). Today, Thursday 18th January, you get to play on the Lucky Fruit 7’s slot. On 19th you get to play on the Turkey Shoot slot. Then you get to play on several other fun slots such as Triple Triple Gold (on the 20th), Triple 10X Wild (21st), Lucky Irish (22nd), Cash Grab (23rd), Double Gold (24th) and Lucky Fruit 7s again on the 25th. There’s also a couple of Weekly Slot Tournaments starting today including the Big Gold Weekend Tournament and the One Two Three Win Tournament.

Slot Tourneys on the Weekend

In the Big Gold Weekend Tournament the prize pool will climb to no fixed amount. It has a $3.00 buy-in fee and the slot that you get to play on throughout this event is the Dragon Master slot. The One Two Three Win Tournament which has a $3.00 buy-in fee. You get to play for a pot that can climb to no fixed amount and the game that you will be playing on is the Jester’s Wild slot.

Also keep an eye out for the Monthly Tournaments. For example there’s the Groundhog Tournament which has a $5.00 buy-in fee. Throughout this tourney you’ll be playing on the Fat Cat slot and the prize pool is fixed at $2,000. The other Monthly Tournament is The Holstein Tournament which has a $5.00 buy-in fee and a $1,000 prize pool to play for. Throughout this event you will be playing on the Cash Cow slot and this event is scheduled to begin on January 31st.