Not too many progressive slots boast of a magical theme that packs a large jackpot like Millionaire Genie. You can appreciate the Arabian themed slot developed by 888’s Random Logic development department which runs the state-of-the-art graphics and transformative sound effects. Any slot game that features a blue genie in the gameplay generally means they arise from a magical lamp to grant you wishes.

The prize for playing the 5 reels and 15 payline slot is accumulative, you can actually win a million. For a chance to become an instant millionaire, go through our independent slot review of the game to find out how it is played and which symbols pay the most.

The game features 5 reels and up to 15 paylines in a grid, fitted with several theme-related symbols that spin throughout the game. A genie floats above a treasure chest, guarding the gold that can only be unlocked by hitting a specific winning combination. You can create a combination out of the symbols in the game that include bags of gold, keys, books, and a Cobra protecting a huge emerald. Going by the storyline of a genie, you have to rub the lamb to make your wish.

Since you can’t rub the magical lamb physically, the highest paying symbol in the game is an Arabic lamb. If you can land five on any of the 15 paylines in the game, you will 1500 coins multiplied by your line bet. Other special symbols in the game include the Magic Genie logo (wild) and the veiled princess which performs the role of a scatter symbol. 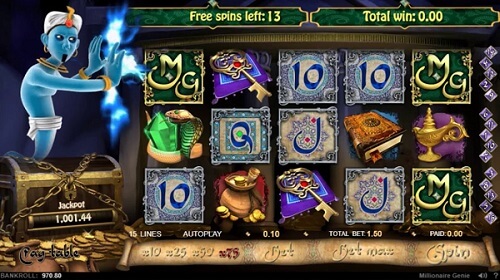 To unlock the Free Game bonus round, you need to get three or more veiled princesses to be able to make your wishes. Once this round is triggered, the blue genie will add wild symbols in the reels and move them around to create a winning combination.

Getting three veiled princesses will grant two wishes during the game. You will win real cash prizes for the first wish. The second wish will come in the form of multipliers. During the bonus round, you will get a bonus reward.

Take your chances at winning life-changing cash prizes by playing the Millionaire Genie slot online. It has a betting denomination that you can afford as a beginner or a high roller. The betting limit ranges from 0.01 coins to the max at 5 coins. So, what are you waiting for? Head over to our top-rated casino sites to play the game and win big.