When you play video poker for full pay or short pay, you must look at the pay tables. That gives you an indication as to how much each winning combination pays for each bet level. When you play the game, you are generally able to play one coin up to five coins. This is not to be confused with the bet that is ultimately made. In which the coin size is a factor. 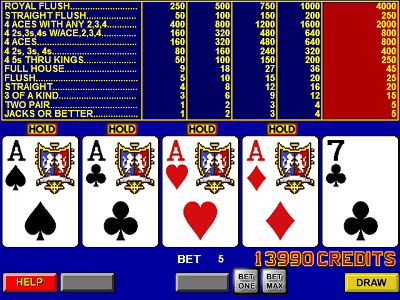 The paytable is easy to find on any video poker game because it is right above the game interface. You’ll come to see when you study the tables that there is quite a difference – a disproportionate one, really – between the payout for a one-coin bet and a five-coin bet. You will also find that there is quite the advantage of playing at the five-coin level when getting paid.

Royal Flushes, for instance, will pay their maximum amount only when the maximum (five-coin) bet is made. You can get there by clicking the “Max Bet” for your coin size on the bottom right of the interface. The difference between the payout on this and other winning hands-on five coins and four coins is much more than the difference between four coins and three, and so on down the line.

How Full and Short Pay Work

Full pay video poker games are those that have the highest potential to payout. While the games that have a lower payout percentage are the short pay.

In case you were wondering how the bets are constructed, here is an example. If the minimum bet on a round of play is $1, you would be wagering $5.

A short pay game does not offer all the value in the world to you. To use an example, if you’re playing Jacks or Better, you would be paid nine coins on a one-coin bet for a full house. Compared to just eight coins on a full pay game. This may sound inconceivable, but it is estimated that a Jacks or Better game with a short paytable may present the house with an edge that is up to six times greater than the same game with a “full pay” table.

So, there is a considerable gap.

Something different than this that you want to be on the lookout for is games with the payouts on the lower-ranked winning hands. Like three of a kind or two pairs is lower, for the sake of making the payouts on higher-ranked hands like the Straight Flush or Royal Flush, which are listed that way for effect. We all know the chances of getting those hands are low, so you shouldn’t be misled by that.