No crapless craps is not better than traditional craps games. Crapless craps is a variant on the time-honored game of craps. Crapless craps introduces an intriguing rule in which you cannot lose on a pass line bet. These modifications, as you might expect, makes this variation a little inferior to the standard dice game.

When the shooter tosses a craps, a name for the numbers 2, 3, or 12, you do not lose on the come-out roll in this modified version of a conventional crap game. Instead, the number rolled becomes your point, exactly as 4, 5, 6, 8, 9, or 10 do in a conventional game. Furthermore, if the shooter throws a natural 11, you do not win. It, too, begins to be the point. With these added rules, the house now has a 5.4% edge on your pass line wager, compared to a 1.4% edge on a standard craps game. 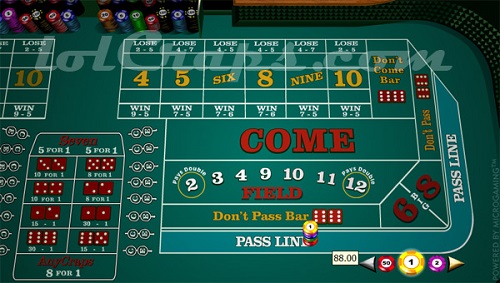 How Does Crapless Craps Play

Crapless craps follows the same principles as traditional craps, except that any totals other than seven create a point. As a result, on the come-out roll, you either win with a seven or established a point. If you’re new to craps, here are the rules for the pass bet, the most basic wager in craps, as well as crapless craps.

Before you can jump right into placing real money crapless craps bets, we would suggest weighing your options. We take you through the pros and cons of playing this variation of craps below.

New casino games are exciting to explore, especially if you’re bored with classics like baccarat, blackjack, craps, and roulette. However, like we discussed with crapless craps, you must also exercise caution while playing. Crapless craps promises that pass line bettors can never lose on the come-out roll. However, the rules result in a 5.38% house edge.

Worse, you can’t place both don’t pass line or don’t come bets. If you must attempt crapless craps, we highly suggest limiting your wagers as little as possible.

Does Stopping the Reels of a Slot Machine Change Outcome?