Home » Tyson Fury Wins Vegas Fight Plus $5,400 at the Casino

Tyson Fury Wins Vegas Fight Plus $5,400 at the Casino

Tyson Fury had a weekend to remember on Saturday night in Las Vegas. The 31-year-old defeated Otto Wallin via a unanimous decision after nine rounds. He got a severe cut above his eye, but his luck continued after he left a Las Vegas Casino £5,000 ($5498,80) richer. Fury went on to get medical attention for his cut and later struck gold at a casino before grabbing himself a couple of few beers. 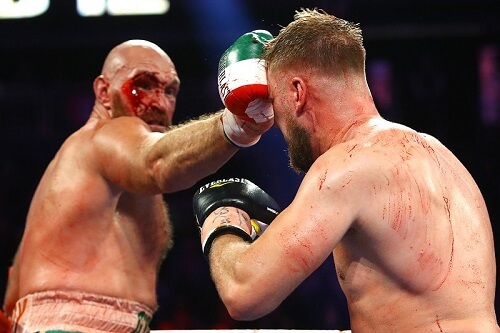 Post the fight, the heavyweight boxer spoke about his readiness for the long-awaited rematch with the WBC World Heavyweight Champion Deontay Wilder. Fury drew the initial bout that took place on December 1st, 2018 at the Staples Center. The controversial decision has left tension between the two fighters with each feeling like they did enough to win the boxing match. This latest win will surely boost Fury’s confidence going into his next fight. The rematch with the American boxer will take place later on the year and Fury is adamant that he will be able to hand Wilder his first loss.

Night Out at a Vegas Casino

Following the fight, the Brit got 40 stitches from the hospital and had an early night. He recounts the details of his win, stating that his celebrations included getting intoxicated in the process. After the fight; “I went to the hospital, had a few stitches, went home and had an early night said the Brit. “Then I got up, gone to the casino, won five grands, had a few beers and now I’m going to have a few more beers” he continued. If you think lady luck is also on your side, you don’t have to fly all the way to Las Vegas to enjoy your favourite casino games. Simply sign up at any of our recommended casinos sites online and win big today